Seattle’s Garfield High School teacher Jesse Hagopian was arrested during an “Occupy the Capitol” protest last week about school funding. In response, 500 students at Garfield walked out and have been organizing ever since. Hagopian was interviewed on Nov. 30 on “Countdown with Keith Olbermann” about the protests. This was his second time on the national news. He was in Haiti when the 2010 earthquake caused massive destruction. Hagopian threw himself into the relief efforts. 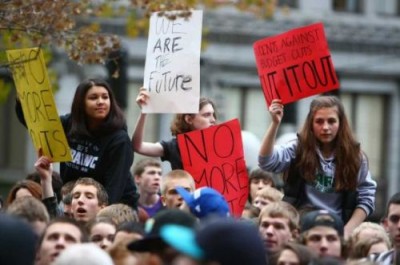 We were honored when Hagopian wrote to us this week to say:

We are doing the Abolition movement role play by Bill Bigelow in class. Today my students wrote their own imagined biographies that were very powerful. It is far different than it has ever been to teach this lesson, because these students already know why people would want to get together for a cause they believe in and risk something to fight for their beliefs.

The students at Garfield have started a city-wide organization and are working on a city-wide action for next week that could be a very big deal . . . It’s just amazing to see the kids, who were in my class last year when I used the entire Zinn Education Project website, now leading a social movement!

The role play by Bill Bigelow, ‘If There Is No Struggle…’: Teaching a People’s History of the Abolition Movement, was originally published in Rethinking Schools.