In early December, we were elated to return in person for our Zinn Education Project booth and workshops at the annual National Council for the Social Studies conference in Philadelphia.

Our team offered four popular workshops: Who Ended Slavery? How the Enslaved Resisted; Teaching the Black Freedom Struggle: A Discussion on Reconstruction Education in K–12 Schools; What We Don’t Learn About the Black Panther Party; and How Red Lines Built White Wealth: Housing Segregation in the 20th Century. In each session, attendees had the opportunity to experience portions of the lessons led by Ursula Wolfe-Rocca, Mimi Eisen, and Adam Sanchez. The School District of Philadelphia social studies coordinator and Zinn Education Project colleague Ismael Jimenez (in photo to right) presented sessions with his team about how their entire curriculum has a social justice orientation and they are committed to teach outside the textbook. In the face of so many districts attempting to mandate textbook driven instruction, it was encouraging to meet in a city that is affirmatively going in the opposite direction.

Many visitors shared stories about using Zinn Education Project lessons in their classrooms.

Several teacher educators stopped by to tell us how they have used our lessons with pre-service teachers, including Jenni Gallagher. I always point my teacher candidates in the direction of the Zinn Education Project materials. They are honest, courageous, and necessary for powerful social studies learning.

In particular, I’m very grateful for the materials that explore labor history and environmental issues as high quality curriculum resources on these topics are hard to find.

Thanks to donations from publishers, we raffled more than a dozen titles to teachers who participated in the booth activities, such as Share Your Story. The selection included titles for all grade levels related to our campaigns and lessons. 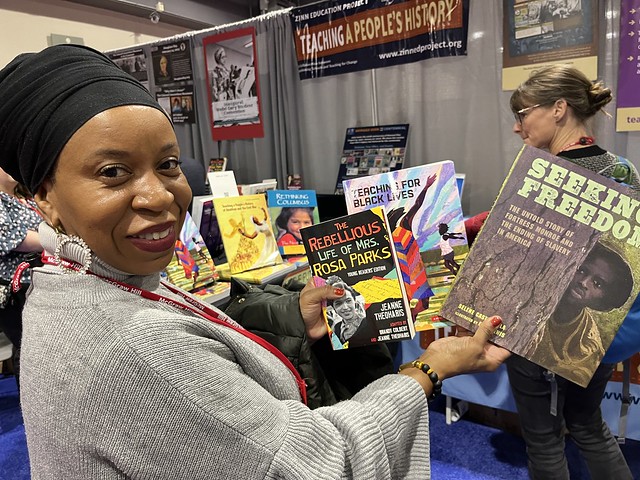 This year’s conference fell during the Howard Zinn Centennial. Teachers shared stories about reading A People’s History of the United States when they were in high school and how the book shapes their teaching today.

William Holtzman, Howard Zinn’s former student and Zinn Education Project co-founder, volunteers at the NCSS booth each year. He is pictured here (in the middle) with two teachers who noted that A People’s History of the United States was a core text for their district’s AP U.S. History classes until recently. They wondered if the rightwing attacks on teaching U.S. history (“anti-CRT”) led to the text being dropped.

We had a chance to meet with many of our colleagues who had exhibits, including Learning for Justice, Facing History, Seven Stories Press, Beacon Press, Haymarket Books, Teach Rock, Americans Who Tell the Truth, CLASP, Human Rights Educators, Mikva Challenge, and the Right Question Institute.

Of course, there were also exhibits and presenters that reminded us of the challenges we face, such as the Ronald Reagan Presidential Foundation and Institute and the Koch funded Bill of Rights Institute.

Get Ready for Nashville

We look forward to the 2023 conference in Nashville. To prepare, we are reading I’ll Take You There, edited by Amie Thurber and Learotha Williams. The Nashville Scene notes that, When selecting entries, there were three criteria [for I’ll Take You There]: “sites that challenge missing or misinformation; sites that reveal privilege or dominance; and sites that celebrate cultural resistance, resilience, and creativity.” The result is intricate and varied.

. . . Many entries critically examine the histories of well-known spots. In “Mansker Station,” Thurber muses that “for White colonists, Mansker Station represented a place of refuge and safety. For the Indigenous inhabitants of the area, it represented the deepening threat to their sovereignty and continued existence on the land they had called home for generations.” The “Aaittafama’ Archaeological Park” entry notes that Old Hickory Boulevard paved over sacred Indigenous burial grounds. The “Downtown” section features the story of Black Bottom, a “center of African-American education, culture, and business in Nashville.” Despite its significant impact on downtown Nashville, “revitalization” projects flattened Black Bottom. We also recommend the picture book, Evicted!: The Struggle for the Right to Vote by Alice Faye Duncan, about what happened to Black sharecroppers in Fayette County, Tennessee, when they tried to exercise their right to register to vote in the late 1950s.

We encourage people’s history teachers to submit a proposal to present at the 2023 NCSS conference. The application will open soon. We’ll post it here when it does.