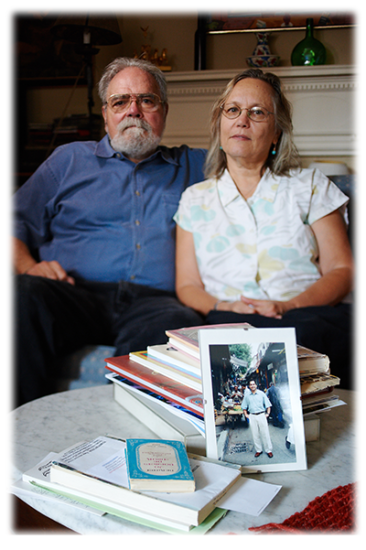 Orlando and Phyllis Rodriguez. Photo from the film In Our Son’s Name.

Orlando and Phyllis Rodriguez spoke out against using September 11, 2001 as a pretext for war. The Rodriguez’s son, Gregory, died when hijackers flew two planes into the World Trade Center. Gregory was thirty-one years old and working on the 103rd floor of one World Trade Center. The Rodriguez family sent this open letter to the New York Times and other papers after the attack.

Our son Greg is among the many missing from the World Trade Center attack. Since we first heard the news, we have shared moments of grief, comfort, hope, despair, fond memories with his wife, the two families, our friends and neighbors, his loving colleagues at Cantor Fitzgerald/ESpeed, and all the grieving families that daily meet at the Pierre Hotel.

We see our hurt and anger reflected among everybody we meet. We cannot pay attention to the daily flow of news about this disaster. But we read enough of the news to sense that our government is heading in the direction of violent revenge, with the prospect of sons, daughters, parents, friends in distant lands, dying, suffering, and nursing further grievances against us. It is not the way to go. It will not avenge our son’s death. Not in our son’s name.

Our son died a victim of an inhuman ideology. Our actions should not serve the same purpose. Let us grieve. Let us reflect and pray. Let us think about a rational response that brings real peace and justice to our world. But let us not as a nation add to the inhumanity of our times.

In Our Son’s Name from Peace On Earth Film Festival on Vimeo.