On June 4, 1967, Muhammad Ali and a group of leading African American athletes held a press conference in Cleveland after Ali announced he was refusing to serve in the U.S. military in Vietnam. 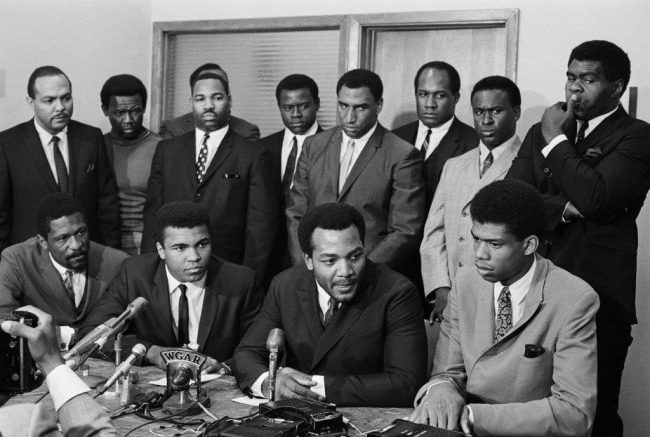 Ali saw the war in Vietnam as an exercise in genocide. He also used his platform as boxing champion to connect the war abroad with the war at home, saying, “Why should they ask me to put on a uniform and go 10,000 miles from home and drop bombs and bullets on Brown people in Vietnam while so-called Negro people in Louisville are treated like dogs?”

Dubbed the Ali summit, the meeting happened roughly a month after Ali refused to step forward at an induction ceremony in Houston after being drafted into the U.S. military and a few weeks  before he was convicted.

Kareem Abdul-Jabbar, Jim Brown, Bill Russell, and Carl Stokes were some of the athletes and political figures involved in the meeting. Watch a short documentary from Uninterrupted about the meeting below.

Colin in Black and White: The Kaepernick Curriculum

Teaching Guide. Presented by Ra Vision Media & Know Your Rights Camp. 2022. 85 pages.
In conjunction with the Netflix series of the same name, this teaching guide provides students with resources and activities to understand and address systemic and institutional racism.