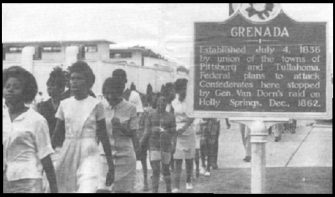 But at the last minute the Grenada, Mississippi school board postponed it for 10 days rather than open the doors to the 450 African American students who had registered to attend the two “white schools.”

The board claimed the delay was due to paperwork.

Even though school hadn’t opened, the white high school played its first football game of the season. Some of the African American students tried to attend the game. They were beaten and their car windows were smashed with baseball bats.

Read a powerful, day-by-day report on the Freedom Movement in Grenada in 1966 by Bruce Hartford at the Civil Rights Movement Archive website. Here is an excerpt of the daily log written at the time:

Friday, September 2. This was supposed to be the first day of school. But at the last minute the school board postpones it for 10 days because of “paper work.” Nevertheless, the white high school plays its first football game. Some of the Negro kids who had registered to go to that school try to attend the game. They are beaten up and their car windows are smashed with baseball bats.

During the next 10 days before school opens, the white power structure wages a fierce campaign to convince Negro parents not to send their children to the white schools. Threatened by loss of jobs and evictions by white landlords, and fearing for the safety of their children, around 200 of the 450 kids who had registered for the white schools are withdrawn and re-registered at the Negro schools.

Meanwhile, the number of whites showing up at the square to harass and attack the night marches steadily increases as the first day of school draws nearer. Violence against those active in the Movement also increases.

Monday, September 5. SCLC field staff members J. T. Johnson and R. B. Cottenreader swear out an arrest warrant against a white man who attacked them while they were picketing Bloodworth’s store. They are then arrested when their white assailant swears out a counter-warrant against them. Robert is attacked again when he is released on bail.

Thursday, September 8. The demands of July 9 are reformulated to reflect the growing understanding that the root issue is power — political power and economic power.

Saturday, September 10. Whites begin marching around the square at the same time as our marches are scheduled. There are now two groups marching side by side around the square (but not, of course, in solidarity). The proximity of the two groups makes it easier for them to jump our marchers. SCLC staff members Alphonzo Harris and Mike Bibler are attacked. Continue reading.

Find resources below for teaching about the Civil Rights Movement.