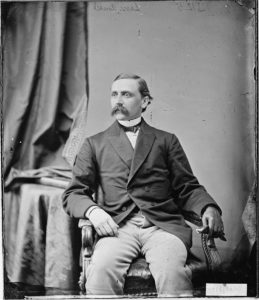 On Jan. 4, 1874 Adelbert Ames becomes the elected governor of Mississippi during the Reconstruction era.

Ames’s open support of African American suffrage helped him become a leader of Mississippi’s Republican Party, which appointed him senator in 1870 and nominated him for governor in 1874.

Ames’ advocacy of African American rights and his deployment of the militia to try to stem the Democrats’ campaign of violence drew the ire of the state’s Democratic Party, which attempted to impeach him in 1876.

He resigned that March.