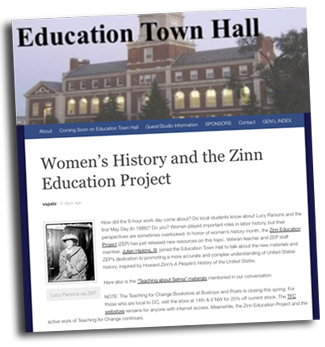 How did the 8-hour work day come about? Do local students know about Lucy Parsons and the first May Day (in 1886)? Do you? Women played important roles in labor history, but their perspectives are sometimes overlooked. In honor of women’s history month, the Zinn Education Project (ZEP) has just released new resources on this topic. Veteran teacher and ZEP staff member, Julian Hipkins, III, joined the Education Town Hall to talk about the new materials and ZEP’s dedication to promoting a more accurate and complex understanding of United States history, inspired by Howard Zinn’s A People’s History of the United States. Here also is the “Teaching about Selma” materials mentioned in our conversation. Interview with Julian Hipkins III starts at 30:00.

Our corporate classrooms: Bill Bigelow on the dangers of standardized curriculums and fresh ideas

Street Roots News
Bill Bigelow is an educator and activist who taught social studies in the Portland Public Schools for more than 30 years. Though he has left the classroom as a full-time teacher, he is actively involved in the U.S. educational system through his work with both Rethinking Schools, a quarterly magazine that focuses on critical issues in education from a social justice standpoint, and the Zinn Education Project, a project that provides teachers with resources to teach outside the textbook and to present a more honest, critical and full portrait of the world. I first became familiar with Bigelow’s work in a classroom on the Quileute Reservation on the Olympic Peninsula in Washington State. I was teaching Family Literacy to a group of Native American and Latina women. Looking for something to supplement the materials I was using, I found a curriculum called “Discovering Columbus,” written by Bill Bigelow. It wouldn’t be until I moved to Portland in 2011 that I would meet Bigelow in person purely by coincidence. He is a gentle and curious man with a passion for education, justice and fairness. I sat with Bigelow to ask him about the plight of, and hope for, our educational system.
Continue reading 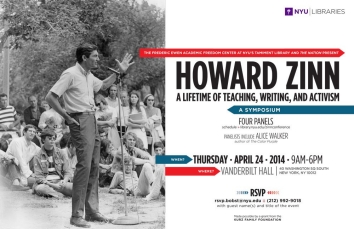 Lesson from ‘Howie’: 12 Thoughts on the Zinn Legacy

Many of the scholars who gathered at Vanderbilt Hall for a recent daylong symposium on Howard Zinn shared a common quirk of speech: They tended to refer to the icon in question as “Howie.”

That’s because more than a few of the assembled admirers of Zinn’s work—including NYU history professor Marilyn Young and writer Alice Walker—were also students, colleagues, or personal friends of the popular historian and lifelong activist who died in 2010.

Upgrade Your Lesson Plans with These 5 Online Resources

Lesson planning is an art. A good lesson requires a fine balance of Higher Order Thinking Skills (HOTS), creativity, student buy in — and, of course, content.

While public perception can reduce the role of teachers to mere conveyers of information — as if knowledge is spread through osmosis — the actual process of creating an engaging, innovative, and informative lesson is far more complex.

Working in isolation to create the "perfect" lesson is time consuming, and relying too heavily on textbook curricula can feel uninspired.

Luckily, there is a happy medium... The below sites are awesome resources to get the juices flowing and inspire teachers to push innovative lessons into their classrooms, without reinventing the wheel.

March is Women's History Month, and International Women's Day, March 8, is also a part of the celebration each year. For educators and students, the month provides a wonderful opportunity to dig deeper into women's contributions, struggles, and triumphs throughout history.

A People's History of the United States

The 50th anniversary of the 1963 March on Washington, a pivotal moment in U.S. history, is Aug. 28. Bill Fletcher Jr., an author, activist and senior scholar at the Institute for Policy Studies in Washington, D.C., offers lesson ideas, such as comparing the text of the speech given by Martin Luther King Jr. with video clips, plus examining other speeches of the day. "We can all do justice to this anniversary by asking the right questions and providing the actual historical context in which the 1963 March unfolded," Fletcher writes in this blog post. The Huffington Post/The Blog

Teaching the 50th Anniversary of the March on Washington

Next Wednesday, Aug. 28, marks the 50th anniversary of the March on Washington, the monumental 1963 civil rights event at which Martin Luther King Jr. gave his "I Have a Dream" speech from the steps of the Lincoln Memorial. Commemorative events, including rallies and panel discussions, are being held over the next several days. On the day of the anniversary, President Obama is scheduled to address the nation from the very spot on which King delivered his speech.

Many of the events, according to reports, are intended not simply to celebrate the original march but to draw much-needed inspiration and lessons from it in the face of continued racial disparities and injustices.

For teachers looking to bring this historical moment to the classroom, a number of organizations are providing resources.