Washington Post
While teaching U.S. history at a public charter high school in the District, Julian Hipkins III noticed that students tended to assume that “race” was as old as mankind. “Almost like it was natural, a given,” as he put it. So, using some specialized lessons, Hipkins helped the students explore the invention of race and the reasons for it, as laid out in colonial law. Especially the Virginia slave codes enacted between 1640 and 1705.
Continue reading

How a Nearly Successful Slave Revolt Was Intentionally Lost to History

Two hundred and five years ago, on the night of January 8, 1811, more than 500 enslaved people took up arms in one of the largest slave rebellions in U.S. history. They carried cane knives (used to harvest sugar cane), hoes, clubs and some guns as they marched toward New Orleans chanting “Freedom or Death,” writes Leon A. Waters for the Zinn Education Project. The uprising began on the grounds of a plantation owned by Manuel Andry on the east side of the Mississippi, in a region called the German Coast of Louisiana. There, a slave driver named Charles Deslondes of Haitian decscent, led a small band of slaves into the mansion of the plantation owners, where they wounded Andry and killed his son Gilbert. The group then armed themselves with muskets and ammunition from the plantation's basement. Some donned Andry’s militia uniforms.
Continue reading

Nonprofit Quarterly
It’s old news, so to speak, about Christopher Columbus. The Genoese explorer received his commission and subsidy from the Spanish monarchs who also brought the Inquisition to Castile and Aragón—as well as to Spanish possessions ranging from the Netherlands and Naples, the Canary Islands, and after Columbus, the Americas as well. As a result of his explorations of the new world, nations of Native Americans were slaughtered with impunity, wiped out, erased from their lands. Bill Bigelow, the curriculum editor of Rethinking Schools and the co-director of the much admired Zinn Education Project, writes on Common Dreams about the greater heritage of Columbus’s voyages—the introduction of the trans-Atlantic slave trade as well as the unleashing of “complete genocide” on the Taínos he encountered in the “New World.” He also notes the relatively consistent manner of presentation Columbus gets in American history books that recounts his enslavement and killing of Taínos in a manner that can do nothing but lead children to think that the lives of the Taínos didn’t—or don’t—matter.
Continue reading

As Cities Give Columbus the Boot, Indigenous Peoples’ Day Spreads Across US

Common Dreams
As Bill Bigelow, educator, curriculum editor of Rethinking Schools, and the co-director of the Zinn Education Project, wrote at Common Dreams last week. "If Indigenous peoples' lives mattered in our society, and if Black people's lives mattered in our society, it would be inconceivable that we would honor the father of the slave trade with a national holiday."
Continue reading

Washington Post
In a blog post published by the Huffington Post, Bill Bigelow, co-director of the Zinn Education Project, which “promotes and supports the teaching of people’s history in middle and high school classrooms across the country,” explained why many historians and indigenous communities find Columbus’s legacy so troubling. “Columbus initiated the trans-Atlantic slave trade, in early February 1494, first sending several dozen enslaved Taínos to Spain,” Bigelow wrote. The following year, Columbus ramped up his attempt at making slavery a profitable enterprise, by rounding up 1,600 Taínos, sending the “best” 550 of those to Spain and telling his fellow colonialists they were free to take whoever remained.
Continue reading

MSNBC
And the time has come to change the tide, says Zinn Education Project co-director Bill Bigelow, who argued in an article last week that from the very onset, Columbus set out on a mission to conquer and exploit—not to discover—and should be remembered in history for starting the trans-Atlantic slave trade, as well as the first terrorist in the Americas. “Enough already. Especially now, when the Black Lives Matter movement prompts us to look deeply into each nook and cranny of social life to ask whether our practices affirm the worth of every human being, it’s time to rethink Columbus, and to abandon the holiday that celebrates his crimes,” he wrote.
Continue reading

CollectedEdNY
Many of us adult educators are familiar with Howard Zinn, the revolutionary historian who wrote “A People’s History of the United States,” and “A Young People’s History of the United States.” If you are a teacher who has enjoyed using excerpts from Zinn’s books in class, you will love this website, with lots of free teaching materials on history that will be engaging and accessible to students. One of the key understandings of a historian is that history is made up of multiple perspectives. The materials collected on this site are a wonderful counterpoint to the supposedly “objective” accounts of history given in many textbooks. The teaching activities here often focus on case histories of lesser known events that show students history is not just the “official” version, and that promote questioning and critical thinking.
Continue reading 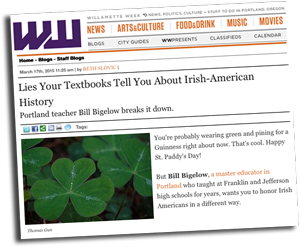 Lies Your Textbooks Tell You About Irish-American History

You're probably wearing green and pining for a Guinness right about now. That's cool. Happy St. Paddy's Day! But Bill Bigelow, a master educator in Portland who taught at Franklin and Jefferson high schools for years, wants you to honor Irish Americans in a different way. Bigelow, curriculum editor for Rethinking Schools magazine, this week penned an eye-opening article for the Zinn Education Project on the Irish potato famine—and the misinformation U.S. textbooks tell students about the largest wave of Irish immigration in U.S. history. (The project honors the late Howard Zinn, the historian who wrote A People's History of the United States.)
Continue reading