Only a crisis — actual or perceived — produces real change. When that crisis occurs, the actions that are taken depend on the ideas that are lying around. — Milton Friedman

Naomi Klein’s new video on Coronavirus Capitalism opens up with the quote above from Milton Friedman, the free market economist. In the midst of today’s unprecedented public health and economic crisis, Klein goes on to discuss the different ideas that are “lying around” to address the crisis. From bailouts for the fossil fuel industry to Medicare for All these ideas will turn into the battle lines of the fights ahead and will determine whether these crises will be solved on the backs of workers, the poor, and with devastating consequences for the planet, or whether they will lead us toward a more just and equitable future.

It’s in times like these that we need to remember and learn from the last great world crisis of this magnitude — the Great Depression. 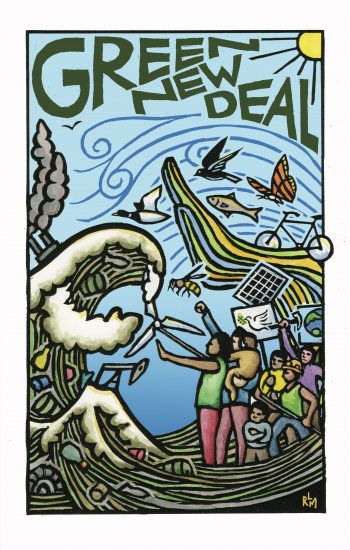 Although most people remember the New Deal as what provided U.S. citizens with a social safety net for the first time, when Roosevelt won the presidency in 1933, the New Deal was more a slogan than an actual set of policies. Roosevelt, borrowed from the ideas that were “lying around.” At first, most of those ideas came from corporate executives and wealthy Southern landowners, but increasing worker militancy and a growing unemployed movement pushed the New Deal towards the more radical ideas workers and the unemployed were pushing.

The two lessons below help students understand the ideas that were on offer at the beginning of the Great Depression and how it took one of the largest strike waves in the history of the United States to win the New Deal.

At a time when politicians of all stripes are debating the desperately needed Green New Deal and thinking about unprecedented government intervention into the economy — these lessons are more relevant than ever.

These two free lessons, by Adam Sanchez, are designed for middle and high school classrooms. Note that the first lesson requires small and full group interaction, so would not work well while school buildings are closed. However the second lesson, while designed for a group, could be read at home and/or adapted to remote learning.

Scene on Radio: A New Deal

Two readings for the classroom about the connection between capitalism, deforestation, climate change, and the coronavirus -- and the role of Indigeous Peoples' rights in protecting the environment.

Introduce high school students to people's history with these podcasts.