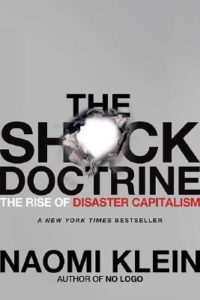 There are a handful of books — Howard Zinn’s A People’s History of the United States comes to mind — that should be read by every teacher and teacher educator. Naomi Klein’s The Shock Doctrine is one of these. From the 1973 Chilean coup — the other September 11 — through today, Klein demonstrates how shock has been used by global elites to push through a radical agenda of privatization and “free trade.”

This disaster capitalism, as she calls it, is the global context that frames our conditions of teaching and learning, our students’ lives, and everything from the wars we wage to the food we eat.

Will our future be one of social and ecological responsibility or increasing inequality and selfishness? For those of us who would prefer the former, Klein’s book will help us chart the course.

“Naomi Klein has written a brilliant, brave and terrifying book. It’s nothing less than the secret history of what we call the ‘Free Market.’ It should be compulsory reading.” —Arundhati Roy

“With a bold and brilliantly conceived thesis, skillfully and cogently threaded through more than 500 pages of trenchant writing, Klein may well have revealed the master narrative of our time. And because the pattern she exposes could govern our future as well, The Shock Doctrine could turn out to be among the most important books of the decade.” —William S. Kowinski, San Francisco Chronicle

Introduction | Blank is beautiful: three decades of erasing and remaking the world

Part 1 | Two doctor shocks: research and development : The torture lab: Ewen Cameron, the CIA and the maniacal quest to erase and remake the human mind — The other doctor shock: Milton Friedman and the search for a Laissez-Faire laboratory

Part 2 | The first test: birth pangs: States of shock: the blood birth of the counterrevolution — Cleaning the slate: terror does its work — “Entirely unrelated”: how an ideology was cleansed of its crimes

Part 4 | Lost in transition: while we wept, while we trembled, while we danced : Slamming the door on history: a crisis in Poland, a massacre in China — Democracy born in chains: South Africa’s constricted freedom — Bonfire of a young democracy: Russia chooses “the Pinochet option” — The capitalist id: Russia and the new era of the boor — Let it burn: the looting of Asia and “the fall of a second Berlin wall”

Part 5 | Shocking times: the rise of the disaster capitalism complex: Shock therapy in the U.S.A.: the Homeland Security bubble — A corporatist state: removing the revolving door, putting in an archway

Conclusion | Shock wears off: the rise of people’s reconstruction.