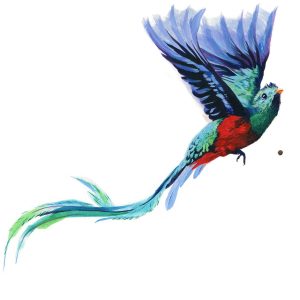 When I designed this unit, I was teaching at a K–8 independent school in Winchester, Massachusetts, that serves a gifted and “twice-exceptional” (gifted students who also have special needs) student body. Because of the structure of the school, each year I’m able to invent a theme-based curriculum from scratch. For the 2016–17 school year, I chose climate change: I felt the urgency of educating students about this topic and I was excited by the mosaic of subjects that fall under the larger climate change umbrella.

I entered the year believing I would spend much of my instructional time helping students investigate the basic science and social factors behind climate change. With a firm understanding of human influence on natural systems, I reasoned, my students could move on to thinking about solutions. I designed mini-labs surrounding the science of heat and light, and students worked in groups to create artistic representations of fragile balances that were being thrown off, such as melting glaciers and disruptions in El Niño and La Niña. However, by the end of October I began to realize a shift was necessary.

Two major problems arose. First, while some students identified with the subject they had researched for the artistic modeling project, others had not been emotionally engaged. The abstract concepts of oceanic currents and sheet ice were not the easiest to identify with. While students could intellectually process that climate change was “bad,” they didn’t feel an emotional stake in the issue. Also, these lessons had not left students feeling empowered.

During one of our early discussions about the greenhouse effect, Sophie exclaimed, “Why are we even learning about this if there’s nothing we can do about it?”

Disengaged and depressed was not what I was aiming for.

I thought that my students needed a more concrete angle to understand the effects of climate change and the possibilities for climate justice. I decided we should focus on biodiversity, with hopes that thinking about the interaction of plants and animals with climate change could leverage my students’ strong empathy for the natural world. In addition, biodiversity and ecosystems inherently lend themselves to systems thinking.

This lesson originally appeared in the Fall 2018 issue of Rethinking Schools.