To respond to our global house-on-fire climate emergency, the Zinn Education Project launched its Teach Climate Justice Campaign to push for more intensive teaching of the climate crisis in schools and to help educators turn the crisis into a teachable moment. The campaign includes an online library of free, downloadable K–12 climate justice curriculum and other teaching resources; a platform for teachers to reflect on and discuss the teaching of climate change; workshops on climate justice teaching; and articles that expose the often-biased, pro-fossil fuel curriculum used in schools, and promote the urgency of climate justice education. 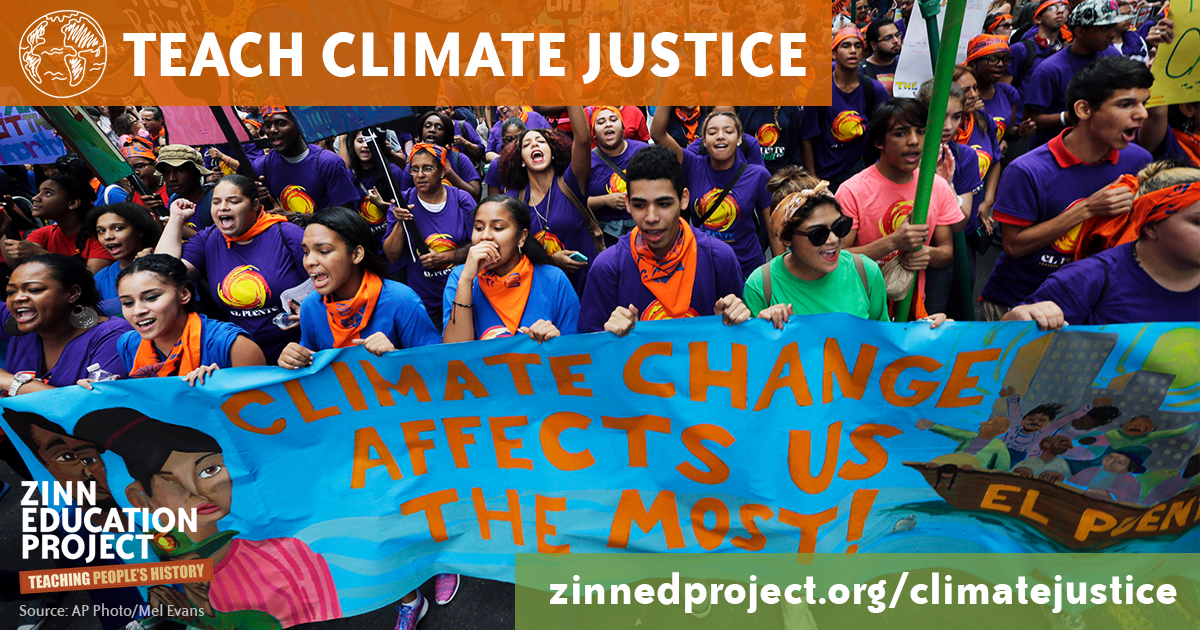 Zinn Education Project co-director, Bill Bigelow, points out that the official school curriculum has minimized or even lied about the severity of the climate crisis:

Even in supposedly ‘green’ Portland, Oregon, where I taught high school social studies for 30 years, an audit last year of 15 school district-adopted social studies and science textbooks found that they all did a miserable job helping students understand the crisis. Every single book was out of compliance with school district policy on teaching the truth about climate change.

Elementary teachers still have access to “The United States of Energy,” a series of pro-fossil fuel lessons produced by the education behemoth Scholastic, and paid for by the American Coal Foundation, an arm of the coal industry. Scholastic distributed tens of thousands of these lesson booklets free to teachers. This curriculum asks students to catalog the “advantages” of coal and says nothing about its planet-wrecking disadvantages.

To respond to the gulf between the enormous threats posed by the climate crisis and the way it has been ignored and misrepresented in school, the Zinn Education Project has assembled the most comprehensive collection of climate justice teaching materials available: role plays, poetry activities, simulations, mixers, stories, and curriculum to accompany films. Some of these are lessons that first appeared in Rethinking Schools magazine, like Eric Fishman’s “Where Are the Climate Change Superheroes?,” which describes an imaginative game he uses with his 4th graders about how climate change is unfolding in Costa Rica, with kids taking on the roles of avocado trees and the quetzal — a revered bird. In “Teaching to the Heart,” Michelle Nicola shows how she uses Kathy Jetñil-Kijiner’s poignant, student-friendly poem “Dear Matafele Peinam” with her 7th graders. Another lesson, Ursula Wolfe-Rocca’s “Standing with Standing Rock,” helps students see, through role play, who benefits and who suffers from the Dakota Access Pipeline, and introduces students to those who resist.

The campaign site also includes lessons from the book, A People’s Curriculum for the Earth: Teaching Climate Change and the Environmental Crisis, edited by Zinn Education Project co-director Bill Bigelow and Portland, Oregon, teacher Tim Swinehart. These help students consider the systemic roots of global warming, like the trial role play “Who’s to Blame for the Climate Crisis?” and “The Thingamabob Game,” a simulation that immerses students in the incentives and pressures that discourage corporations from lowering greenhouse gas emissions.

Teach Climate Justice also offers teachers the opportunity to discuss their own climate change teaching challenges and successes. The site includes drafts of lessons with encouragement to teachers to test these out and to comment. One of these is a new climate activist mixer that Portland, Oregon, teachers Matt Reed and Tim Swinehart led for 75 teachers at a recent Teach Climate Justice event, sponsored by the teachers union. In the mixer, participants take on the personas of climate justice and anti-fossil fuel activists from around the world — especially young activists like Xiuhtezcatl Martinez of Earth Guardians and Our Children’s Trust and Simmone Ahiaku, a founder of the Fossil Free campaign in the United Kingdom — and learn about the breadth of movement strategies by meeting diverse activists. It’s an activity that shows students how climate justice is inseparable from racial justice, gender justice, and economic justice.

The Zinn Education Project’s Teach Climate Justice campaign also offers professional development workshops by some of the teachers and writers featured at its site. In these workshops, educators and community members experience the power of curriculum that is both engaging and honest and devise plans for investigating and addressing the climate emergency in their own classrooms, school sites, and communities.

In 2016, teachers, parents, students, and climate activists organized to get the Portland, Oregon, school board to pass the most comprehensive climate justice resolution in the country. The Teach Climate Justice campaign offers how-to lessons on strategies to approach building a similar campaign in other communities.

We need more informed citizens of the world. Learning the truth about the climate will lead students to take action. If young people understood what is at stake, there would be millions more climate justice activists.

The Zinn Education Project is a collaboration between the education nonprofits Rethinking Schools and Teaching for Change and is dedicated to providing teachers free teaching materials that can help students question the roots of injustice and recognize the role that social movements play in making the world a better place. More than 92,000 educators have registered to access the Zinn Education Project’s free curriculum materials.

For general or media inquiries, write to zep@zinnedproject.org.