For Veterans Day, we share stories about African Americans who faced terrorism in the United States before and after their deployment, soldiers who organized against the Vietnam War, and veterans of an early fight against fascism who were criminalized by the U.S. government.

“What shall it profit us to cross the seas to destroy Hitler,
if Hitlerism is to rise triumphant over our homes?”
— Chicago Defender 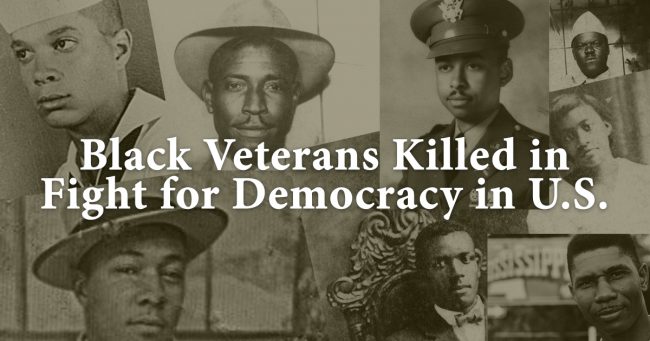 Many Black veterans who fought overseas were murdered for exercising their democratic and human rights on their return. We share stories about these veterans in our This Day in History series.

As Matthew Delmont describes in his new book, Half American: The Epic Story of African Americans Fighting World War II at Home and Abroad, Black soldiers experienced terrorism in training camps before they were deployed. One soldier wrote that his battalion faced “an unholy alliance of state police, southern white MPs, and southern sheriffs.”

As the Equal Justice Institute notes in the Introduction to their report on these atrocities,

Between the end of Reconstruction and the years following World War II, thousands of Black veterans were accosted, assaulted, and attacked, and many were lynched. Black veterans died at the hands of mobs and persons acting under the color of official authority; many survived near-lynchings; and countless others suffered severe assaults and social humiliation. Documenting these atrocities is vital to understanding the incongruity of our country’s professed ideals of freedom and democracy while tolerating ongoing violence against people of color within our own borders. In 1936, the day after Christmas, 96 Americans sailed from New York to help Spain defend its democratic government against fascism. Ultimately, 2,800 U.S. volunteers reached Spain to become the Abraham Lincoln Brigade.

They were poets and blue-collar workers, professors and students, seamen and journalists, lawyers and painters, Christians and Jews, Blacks and whites. The Brigade was the first fully integrated armed force from the United States.

Langston Hughes reported from Spain. Matthew Delmont explains, “Each dispatch warned that a life-and-death struggle against fascism was under way in Spain and that Black Americans were among the first to try to stop Franco, Mussolini, and Hitler.” Although not visible in textbooks, veterans played a major role in the anti-Vietnam War movement.

As described in the excellent documentary, Sir! No Sir!: more than 200 underground newspapers were published by soldiers around the world; thousands joined local and national antiwar GI organizations; thousands more demonstrated against the war at every major base in the world in 1970 and 1971, including in Vietnam itself; stockades and federal prisons filled with soldiers jailed for opposition to the war and the military.

Historian Howard Zinn was a World War II veteran. On this Zinn centennial, we recommend his book, The Bomb. The late historian and activist Howard Zinn was familiar with bombs — he dropped them on people during World War II, flying as a bombardier in Europe. This is Zinn’s passionate and readable denunciation of bombs — not just “the bomb,” but all bombs.

In the The Bomb’s two chapters — one on Hiroshima and one on Royan, France, where Zinn dropped napalm late in World War II — Zinn poses the crucial question: “What can we learn to free us from the thinking that leads us to stand by . . . while atrocities are committed in our name?” The Bomb is the kind of critical, angry, but hopeful history telling for which Howard Zinn is so deservedly well known. — Bill Bigelow, Rethinking Schools

Half American: The Epic Story of African Americans Fighting World War II at Home and Abroad by Matt Delmont

Fighting for Democracy: Black Veterans and the Struggle Against White Supremacy in the Postwar South by Christopher Parker. Read the Introduction online.

“We Return Fighting: World War I and the Shaping of Modern Black Identity” Introduction by  Lonnie G. Bunch III. Edited by Kinshasha Holman Conwill. Watch video of talk about the book and exhibit at NMAAHC.

Find more resources below for teaching outside the textbook about Veterans Day below, including the excellent film Sir! No Sir! about soldiers who organized against the Vietnam War.

For Veterans Day in 2017, the Koch Brothers funded Bill of Rights Institute released a lesson for schools called, "Pat Tillman and Self Sacrifice: A Different Direction." The lesson exploits the memory of NFL player Tillman, much as the U.S. government did soon after he was killed in Afghanistan on April 22, 2004.

The Vietnam Veterans Against the War (VVAW) was founded in New York.