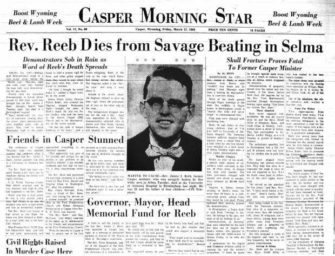 Reverend James Reeb — social worker, Unitarian Universalist minister, and father of four — was severely beaten by a group of white men in Selma on March 9, 1965 and died two days later on March 11.

Continue reading in the Encyclopedia of Alabama.

James Reeb was murdered by the indifference of every minister of the gospel who has remained silent behind the safe security of stained-glass windows.

He was murdered by the irrelevancy of a church that will stand amid social evil and serve as a taillight rather than a headlight, an echo rather than a voice.

He was murdered by the timidity of a federal government that can spend millions of dollars a day to keep troops in South Vietnam yet cannot protect the lives of its own citizens seeking constitutional rights. Yes, he was even murdered by the cowardice of every Negro who tacitly accepts the evil system of segregation, who stands on the sidelines in the midst of a mighty struggle for justice. Read eulogy in full via Beacon Press.

The NPR podcast, White Lies, by two journalists from Alabama, explores the lies that kept the murder of James Reeb from being solved.

Learn about Reeb and others involved in the Selma movement in the Zinn Education Project article “Ten Things You Should Know About Selma” and other resources listed below.