On March 15, 1960, students from South Carolina State and Claflin College organized to desegregate the lunch counter at Kresge 5&10 in Orangeburg, South Carolina. Though their efforts were disciplined and peaceful, 400 were attacked by police with firehoses and herded into a stockade in one of the largest mass arrests of the Civil Rights Movement. 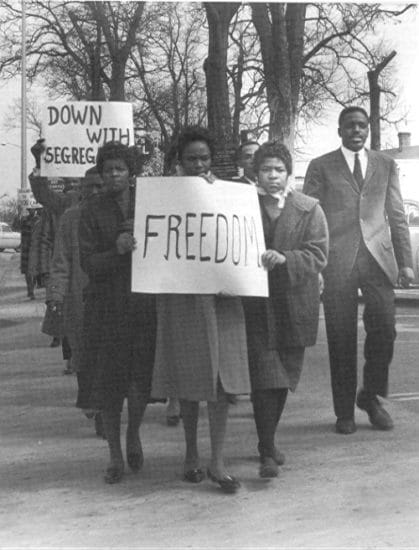 Students are welcome to spend their money at the Kress store in downtown Orangeburg, but they can’t eat at the “white-only” lunch counter. . . On February 25th and 26th, some 40 students from the two schools try to sit-in at the Kress lunch counter, but the counter is closed and the stools removed. . .

The white power-structure declares that the demonstrations are the work of outside-agitators, possibly Communist inspired. The city passes an ordinance to prohibit picketing.

In mid-March, Kress and other stores re-open their lunch counters. On March 15 — a cold, wet, winter day — Claflin Student Council President Tom Gaither and SCSC freshman Charles “Chuck” McDew, lead almost 1,000 students on a peaceful march downtown to protest segregation and support the wave of sit-ins occurring in Rock Hill, Columbia, Sumter, Spartanburg, and across the South as a whole. (Among the student leaders is James Clyburn who today represents Orangeburg and the 6th District in Congress.) Walking two-by-two on the sidewalk from their rally point on the Claflin campus, they march in groups of 50-75 so that they can’t be accused of disrupting traffic.

The cops order them to halt and return to campus. They refuse. The cops attack them with clubs and tear-gas. The fire department knocks them off their feet with freezing water from high-pressure hoses. Holding to the self-discipline of nonviolence, a hard core of protesters stand their ground.

Almost 400 are arrested in the largest Freedom Movement mass arrest up to that time. Soaking wet from the hoses and rain, shivering from the 40-degree weather, they are forced into an outdoor stockade that according to local lore had at one time been the site of slave auctions. They cling together for warmth and sing “God Bless America,” “The Star-Spangled Banner,” and newly learned freedom songs like “We Shall Overcome.” Supporters who try to pass them food and blankets are also arrested.

Swift, railroad-style trials for the arrested protesters begin three days later on March 18. They are defended by attorney Matthew Perry of the NAACP. The judge throws him in jail for “pursuing his case vigorously.” Convicted of “Breach of the Peace,” the protesters appeal the verdicts and refuse to pay their $50 fines (equal to about $444 in 2021). Eventually, the U.S. Supreme Court overturns the convictions because their sidewalk march was a peaceful, orderly petition for redress of grievances within the protection of the 1st Amendment.

Following the arrests and trials, many of the main student leaders leave campus to devote their full energies to the Freedom Movement. Tom Gaither becomes a CORE field secretary and Chuck McDew becomes the second Chairperson of the Student Nonviolent Coordinating Committee (SNCC).

Read in full at CRMvet.org.