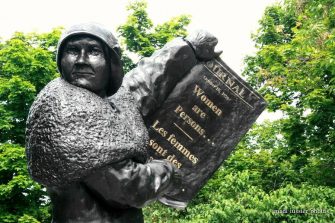 On Oct. 18, 1929, The Persons Case, a legal milestone in Canada, was decided. Five women from Alberta, later known as the Famous Five, asked the Supreme Court of Canada to rule on the legal status of women.

The Privy Council found for the women on this day, declaring that women were persons under the law.

Note that this victory applied to white women, however there was not universal suffrage in Canada until 1963. October 18 has since been celebrated as Persons Day in Canada, and October as Women’s History Month.

Exploring Women’s Rights: The 1908 Textile Strike in a 1st-grade Class

Teaching Activity. By Dale Weiss. Rethinking Schools. 3 pages.
A teacher's reflections about a curriculum unit on women's rights contextualizes the history of the feminist movement within the broader struggle of people working for greater equality in the United States.

Teaching Activity. By Gayle Olson-Raymer.
Questions and teaching ideas for Chapter 6 of Voices of a People's History of the United States on the early women's movement, including their efforts for social, racial, and political equality.