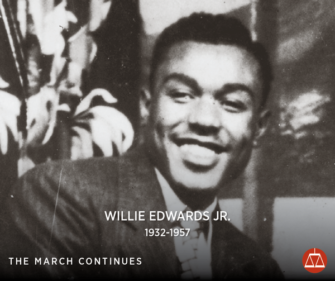 On Jan. 23, 1957, Mr. Willie Edwards Jr., a 24-year-old African American man was murdered by members of the Ku Klux Klan in Montgomery, Alabama. Edwards was kidnapped from his delivery truck and forced to jump to his death from a bridge.

His wife, Sarah Salter, was left to raise their two young daughters. Learn more in ‘Klansmen Abduct and Lynch Black Man in Montgomery, Alabama,‘ from the Equal Justice Initiative.

Most textbooks focus narrowly on Jim Crow segregation, ignoring the pervasive, daily, widespread, and deadly violence against African Americans, other people of color, and Native Americans.

Filmmaker Keith Beauchamp produced the documentary Murder in Black and White: Willie Edwards Jr. from Till Freedom Come Productions. Warning: As can be expected, it is disturbing. But it would be more disturbing to ignore this history.