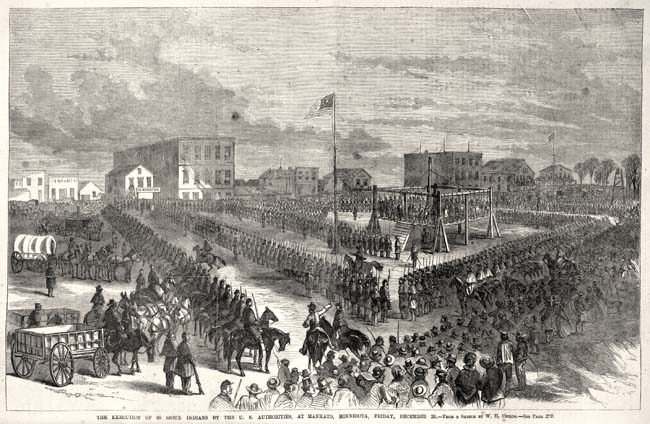 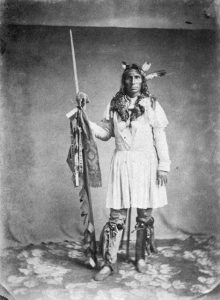 Little Crow, a chief of the Mdewakanton Sioux Vannerson, Julian lead his people in the Great Sioux Uprising in Minnesota 1862.

Jon Wiener provides some background in ‘Largest Mass Execution in US History: 150 Years Ago Today‘ in The Nation,

Minnesota was a new frontier state in 1862, where white settlers were pushing out the Dakota Indians—also called the Sioux. A series of broken peace treaties culminated in the failure of the United States that summer to deliver promised food and supplies to the Indians, partial payment for their giving up their lands to whites.

The Indians responded in the Santee Sioux uprising, killing 490 white settlers. The Dakota were executed for their role in the war of self-defense. As Wiener notes,

[President Abraham] Lincoln’s treatment of defeated Indian rebels against the United States stood in sharp contrast to his treatment of Confederate rebels. He never ordered the executions of any Confederate officials or generals after the Civil War, even though they killed more than 400,000 Union soldiers.

To learn more, we recommend the U.S. Dakota War website and an edition of This American Life, Little War on the Prairie, by the Center for Documentary Studies at Duke University.

Growing up in Mankato, Minnesota, John Biewen says, nobody ever talked about the most important historical event ever to happen there: in 1862, it was the site of the largest mass execution in U.S. history. Thirty-eight Dakota Indians were hanged after a war with white settlers. John went back to Minnesota to figure out what really happened 150 years ago, and why Minnesotans didn’t talk about it much after.

Find a description of the segment with teaching resources in a blog by Debbie Reese on American Indians in Children’s Literature and learn more in the tweet thread below.

On December 26, 1862, 38 Dakota warriors were hanged in Mankato, MN under orders of President Abraham Lincoln in the largest mass execution in U.S. history.

They built a special scaffold to hang them all at once & made Dakota women, children & elders watch as the crowd cheered. pic.twitter.com/ISr6g0gnee