Close to 80 teachers convened at Howard University on April 13, 2019, to participate in a Reconstruction Teach-In as part of the Teach Reconstruction campaign. Norfolk, Virginia middle school teacher Corinna Ferro’s feedback echoes what we heard from attendees throughout the day:

The Reconstruction Teach-In at Howard University exceeded my expectations. I have only briefly addressed Reconstruction as a part of my U.S. History curriculum because it is perceived as an unpleasant period of history that ultimately led to Jim Crow.

Through this Teach-In, I learned a well-rounded way to present Reconstruction—from its successes to its failures. It was refreshing to be in a room with like-minded educators who wish to expose our students to the narratives that have been discounted and devalued.

The material presented was rich with primary documents and able to be immediately implemented in the classroom—a rare treat. I hope to attend more professional development experiences such as this. 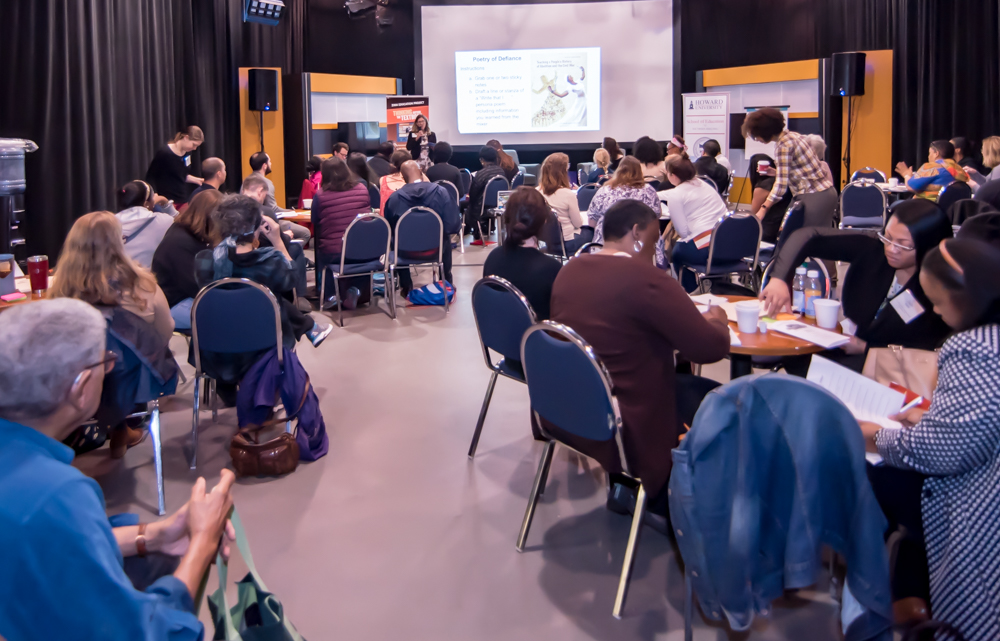 Hosted by the Howard University School of Education, D.C. Area Educators for Social Justice (a project of Teaching for Change), and the Zinn Education Project (a project of Rethinking Schools and Teaching for Change), the teach-in featured workshops, talks, and a special screening of the new PBS documentary, Reconstruction: America After the Civil War. The event was held in the studios of Howard University Television – WHUT.

Dr. Joy Banks from the School of Education welcomed attendees to Howard University, talking about the important tradition of teach-ins as a way to link history and activism. 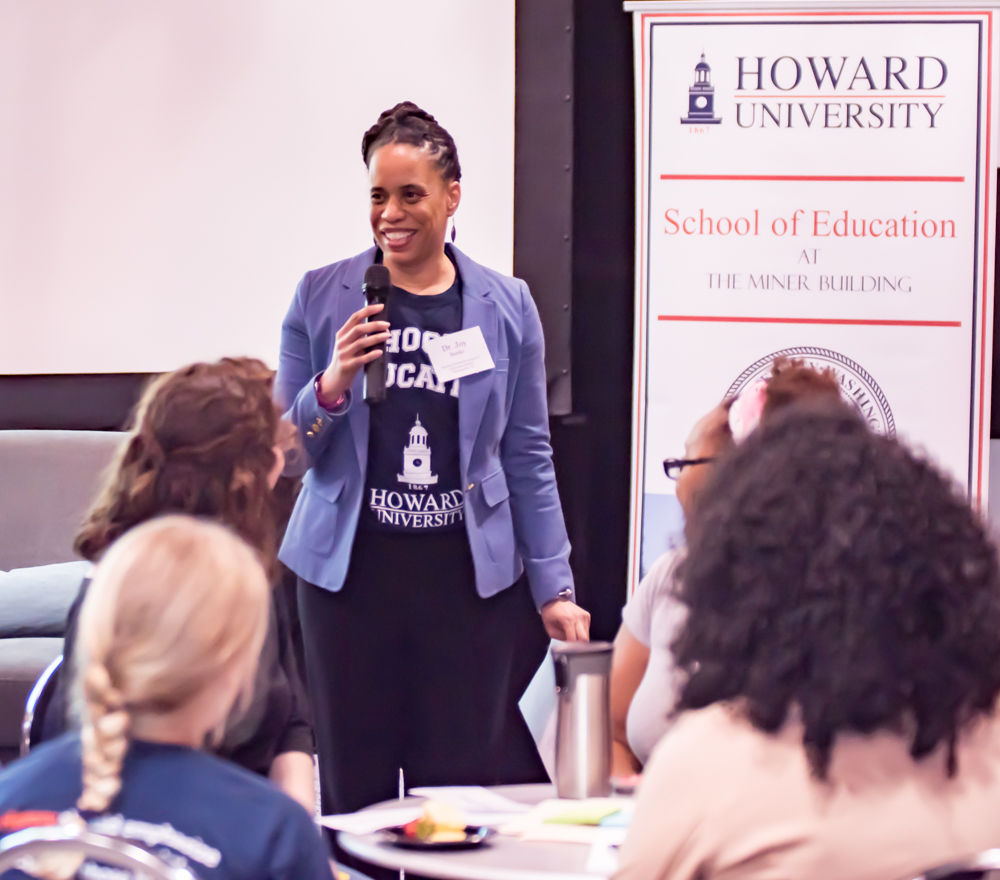 High school teacher and Zinn Education Project curriculum writer Ursula Wolfe-Rocca noted that it was important to place Reconstruction into the long history of African American resistance, starting with slavery. To highlight this resistance, Wolfe-Rocca shared Adam Sanchez’s lesson, “Poetry of Defiance: How the Enslaved Resisted,” from the new Rethinking Schools book, Teaching a People’s History of Abolition and the Civil War.

After a mixer activity in which participants learned about the manifold ways enslaved people undermined slavery and subjugation, they wrote lines for a collective poem, based on the stories they read and heard. Here is an excerpt from their powerful poem: 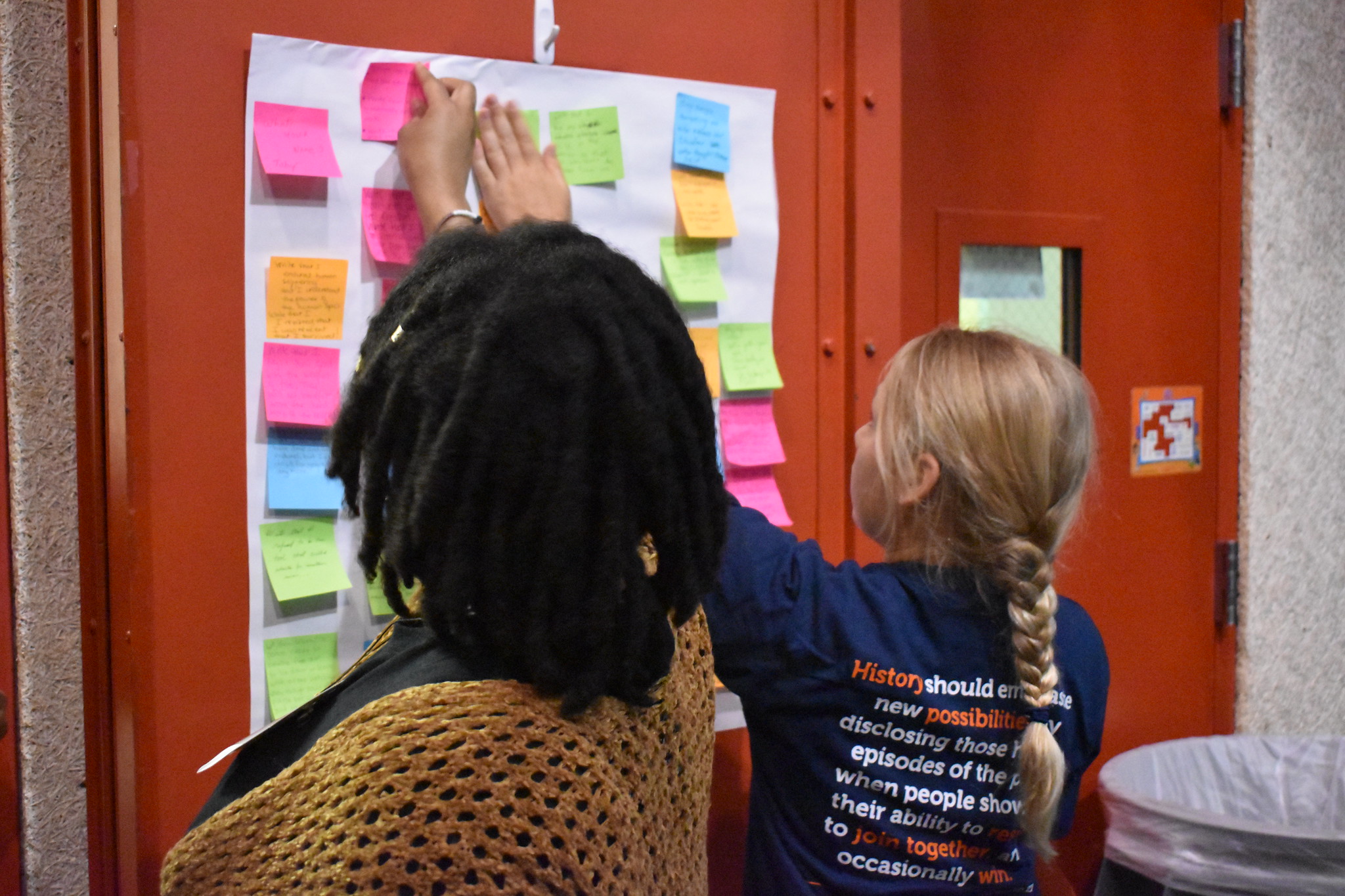 Next, Wolfe-Rocca introduced participants to some of the most dramatic issues facing freedpeople during Reconstruction through the lesson, “Reconstructing the South: A Role Play.” Working in groups of eight, participants grappled with questions about land, labor, voting — and the meaning of freedom — from the perspective of people recently freed from slavery. For example, “Would you be willing to promise the Northern politicians that if they gave you land, that you would continue to grow cotton?” In the debrief, one table noted that they had serious disagreements. Ursula pointed out that is exactly what happens with students and reflects the debates that raged at the time.

For the next segment of the teach-in, participants had a choice between two sessions.

“Reconstruction was the first era of black power.”

Great workshop to #TeachReconstruction. This is such an important era that should not be dismissed from American history.

Wolfe-Rocca offered a workshop based on the lesson, “When the Impossible Suddenly Became Possible: A Reconstruction Mixer,” which explores the connections between different social movements during Reconstruction. 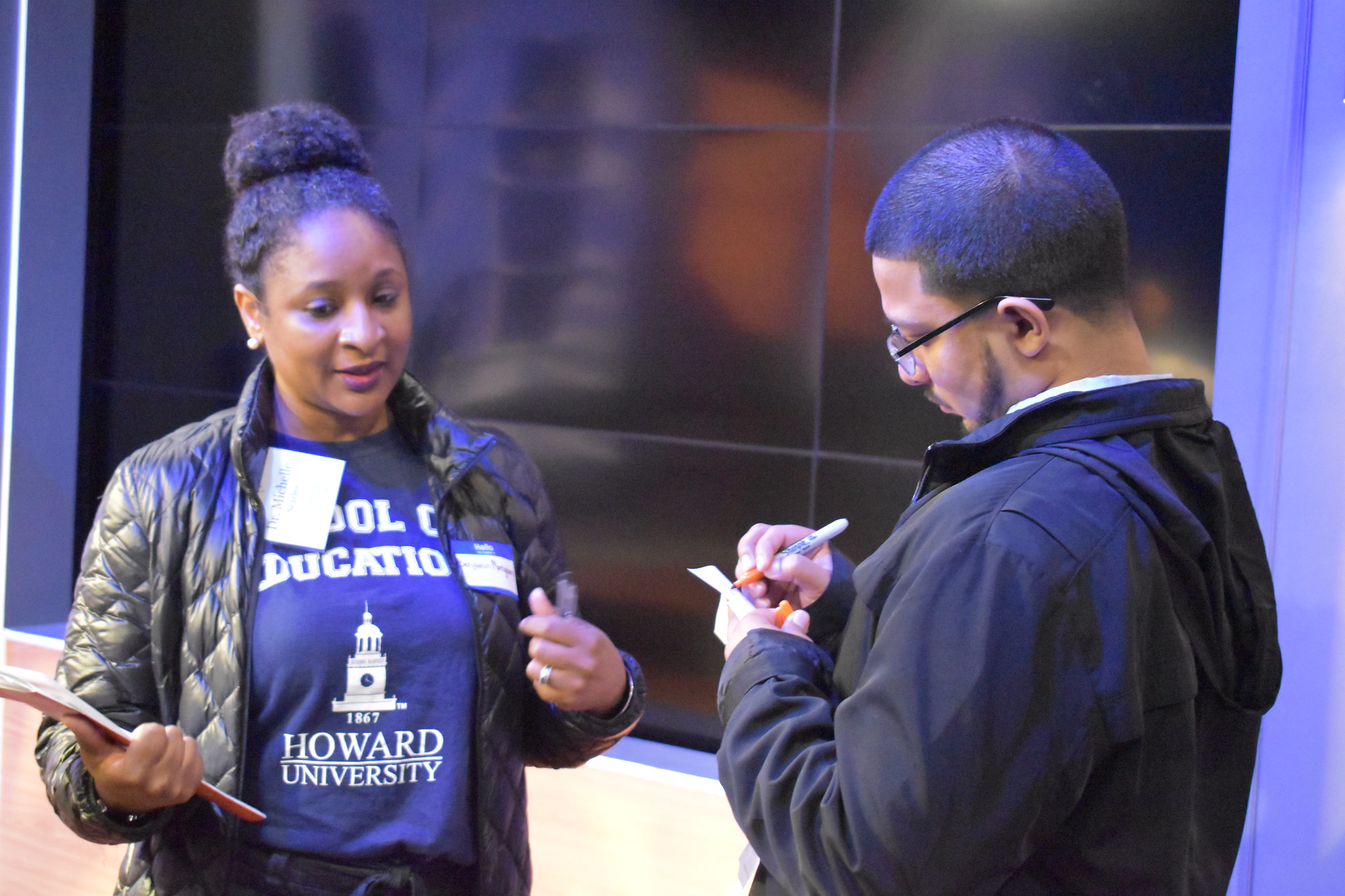 Dr. Edna Greene Medford, who is featured in the film, provided a brief introduction. She emphasized the presence of Black agency, before and after the Civil War:

Men and women decided for themselves that they are going to be free. Long before Lincoln entertained the idea of the Emancipation Proclamation. They knew that they were able to do that and they were clamoring to do that. So that agency is there. There is agency when they were building their own institutions after the war. And these are institutions that they want to control, right down to the school system… they know what they want their children to learn.

“African-Americans did not sit by the wayside and let white men determine their freedom…” said Dr. Edna Medford, esteemed #HowardU History professor. She introduced the #ReconstructionPBS documentary today and is spotlighted in the film. #BlackHistory #BlackExcellence pic.twitter.com/vxJ8sRZpNK

Dr. Gregory Carr shared crucial reflections and important historical context after the film, directing the audience to key texts to read to continue their learning. 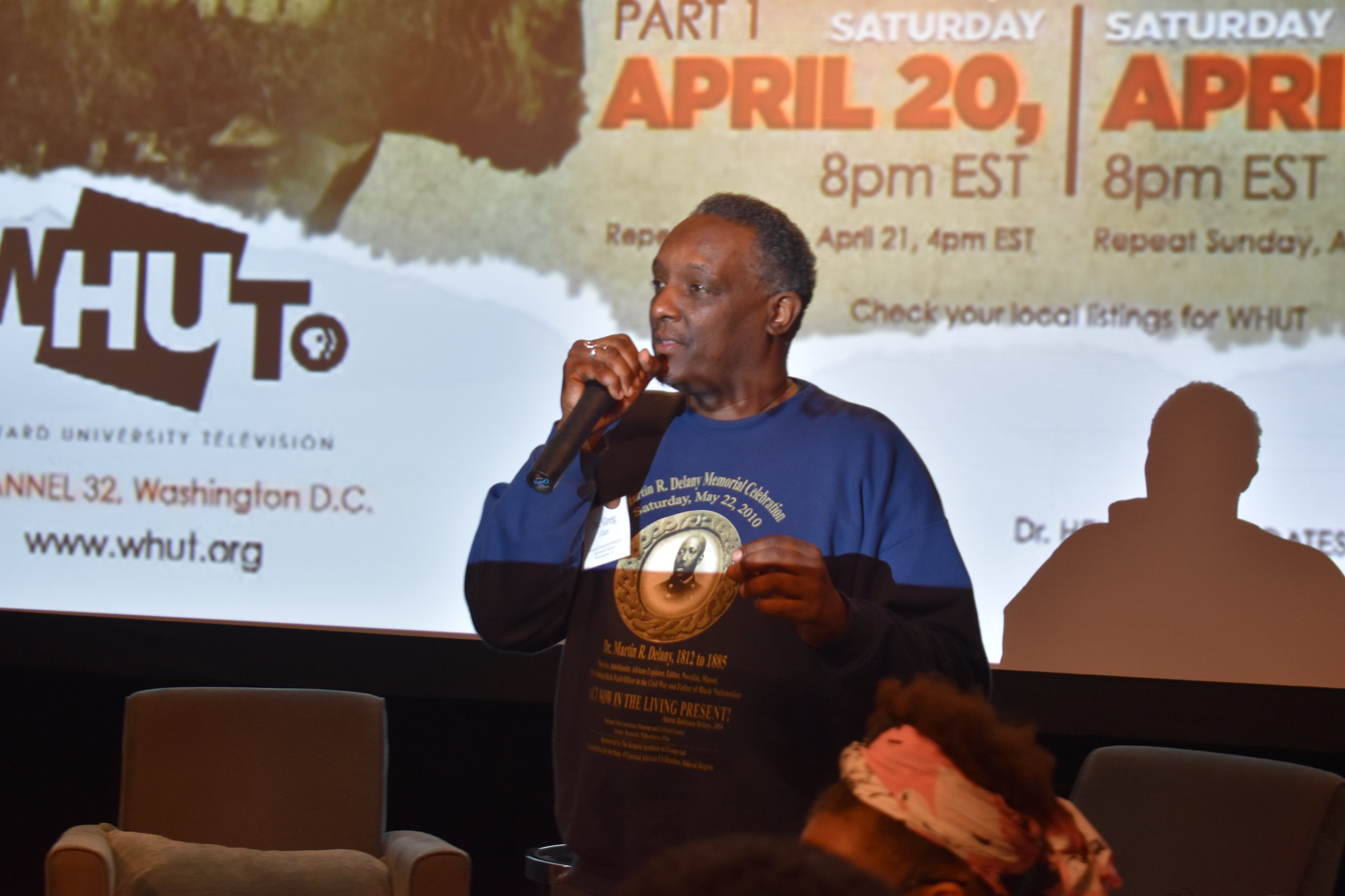 The day was so exhilarating that no one wanted it to end. Dr. Carr offered to stay after to continue the conversation with those who had the time to stay. Almost half the group stayed on for another hour of lively conversation. 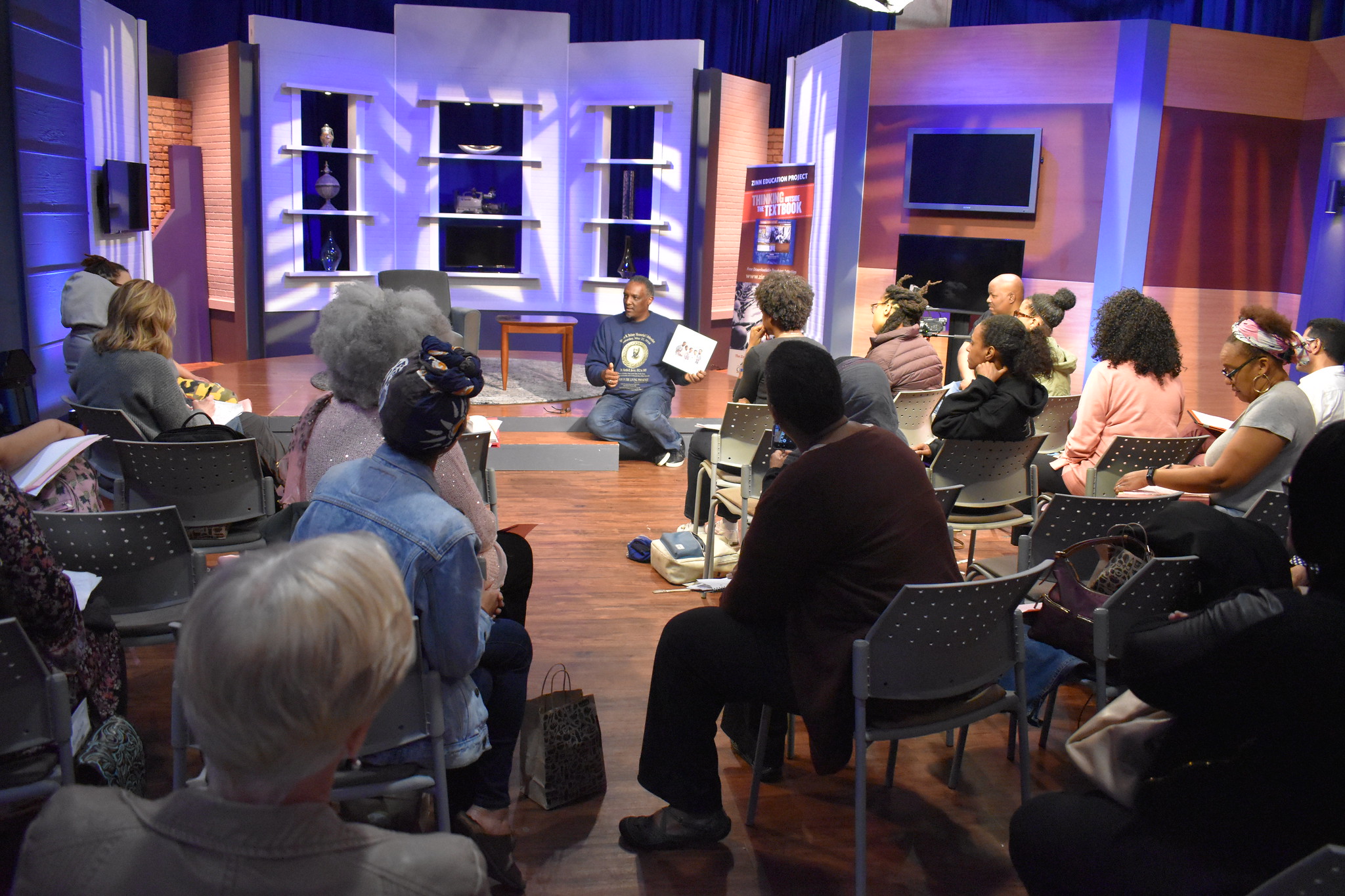 As attendees left, they picked up two free books in exchange for their evaluation. Everyone received a copy of Dark Sky Rising: Reconstruction and the Dawn of Jim Crow, thanks to a donation from the publisher and their choice of another children’s/young adult book. 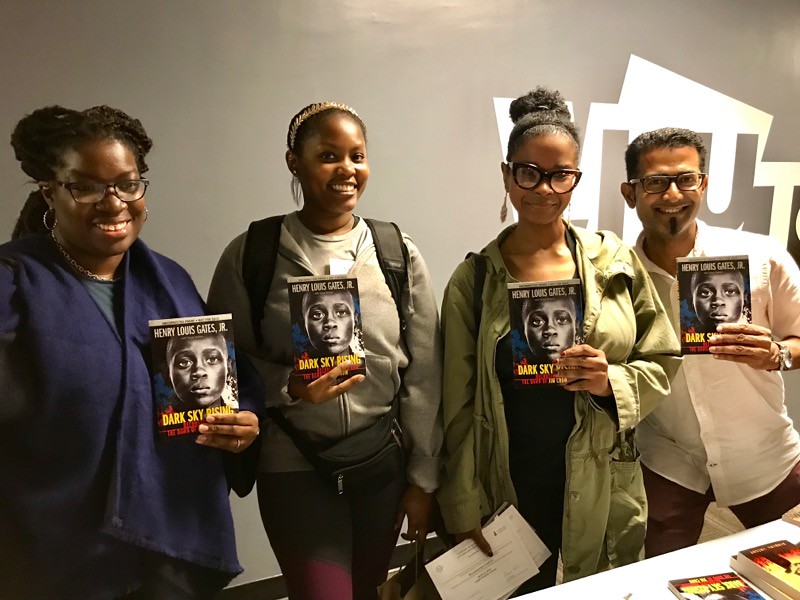 View all photos from the event >>

Here are just a few of the comments from the evaluations and social media.

It is inspiring. Makes me glad to be a teacher and have the opportunity to bring this information to my students.

This was a very valuable experience because it gives educators the ability to discuss best practices and participate in opportunities to advance exercises. Thank you for this chance! 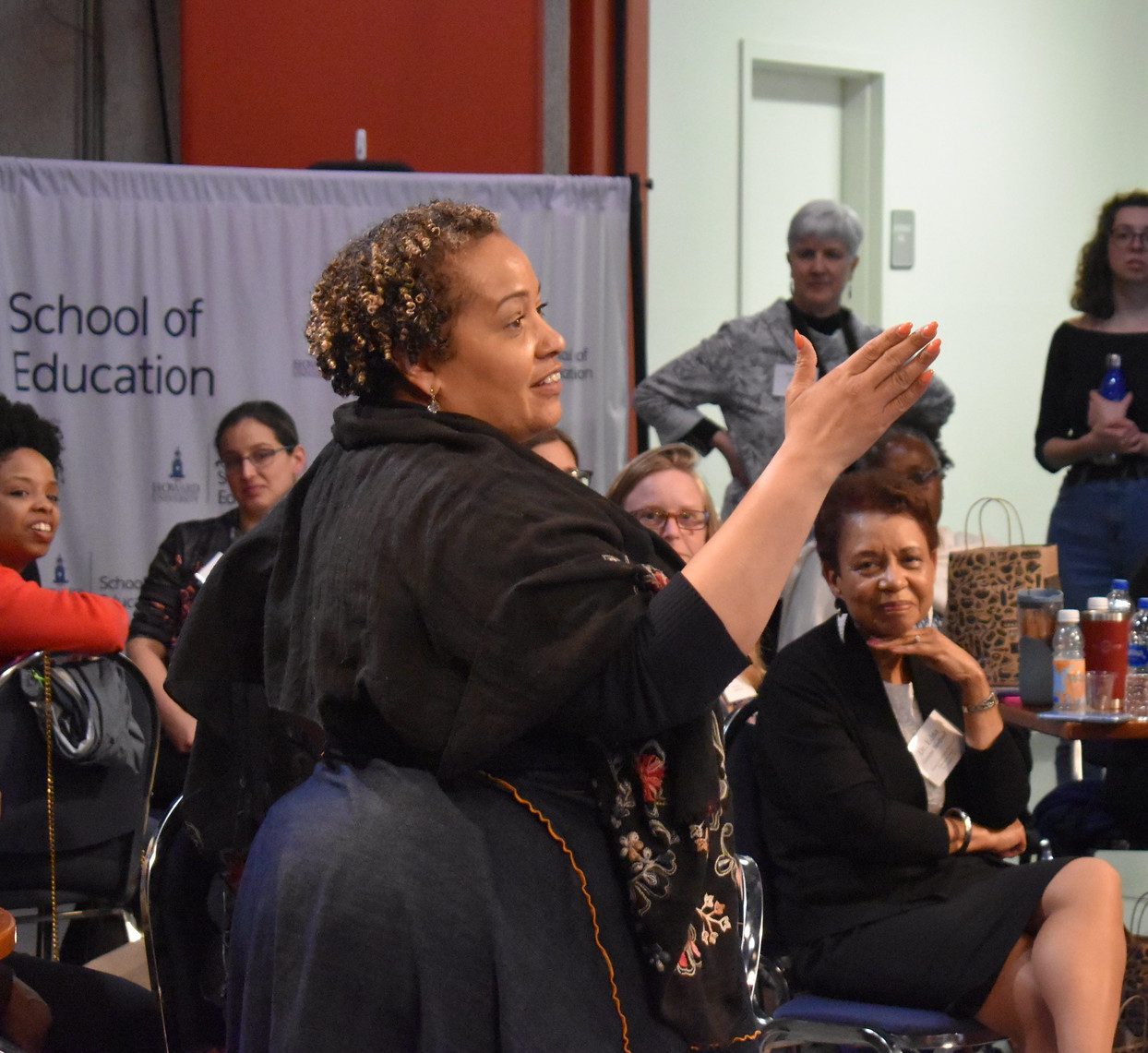 This valuable experience allowed us to network with other teachers and educators that believe in teaching the truth in education. — Ashley Williams

I feel like there are so much that I don’t know. I have a lot to read, understand and share. — Tatana Todd

Each lesson presented would be ideal in part or whole for my 7th-grade students. The poetry and the reflection from historians was important to offer different voices. — Laurel Lennon

The teach-in forced me to reevaluate my understanding of the history of the Reconstruction and the tools & activities that can be used to teach it.

The best part was hearing from Dr. Carr and African-American educators more about an African-centered approach to the history & their experience.

The ability to collaborate meaningfully in these lessons was the highlight of this experience. I love stepping into the spaces that I ask my students to occupy.

The Teach-In gave me an opportunity to expand my knowledge and shift my perspective about Reconstruction. I have a new lens through which to teach my students.

What a full day of learning, sharing, & preparing engaging lessons on Reconstruction for my scholars! My idea of intellectual stimulation and great fun!! 🙌🏾
Thank you, @ZinnEdProject, @HU_SOE, @HowardU Television, and, of course, @AfricanaCarr.#Narratives #Reconstruction #FREE? pic.twitter.com/G045LyrltB