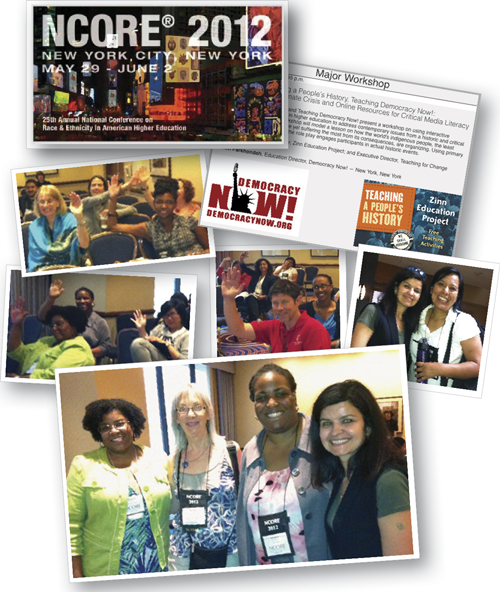 When thinking about climate change, the root causes and the voices of indigenous people are often left out. Not at this year’s National Conference on Race & Ethnicity in American Higher Education (NCORE) in the workshop titled “Teaching a People’s History, Teaching Democracy Now!: Role Play on the Climate Crisis and Online Resources for Critical Media Literacy.” The 90-minute workshop was the first formal collaboration between the Zinn Education Project (ZEP) and Democracy Now! (DN!).

“Talk to the person to your right about when you first became aware of climate change,” participants were asked in the opening icebreaker. “Now, ask the person to your left if they have seen any mainstream news or history textbook coverage about the root causes of the extreme weather we have been experiencing.” Everyone agreed that they had been concerned about climate change for a long time, yet the mainstream press and textbooks ignore all but the symptoms of it.

This drove home the need for classroom resources and media that “teach outside the textbook” and “break the sound barrier” of the mainstream news. The facilitators, Deborah Menkart (ZEP) and Simin Farkhondeh (DN!), gave the 25 participants a chance to participate in a Rethinking Schools lesson, written by Julie Treick O’Neill and Tim Swinehart and posted on the Zinn Education Project website, called “‘Don’t Take Our Voices Away’: A Role Play on the Indigenous Peoples’ Global Summit on Climate Change.” 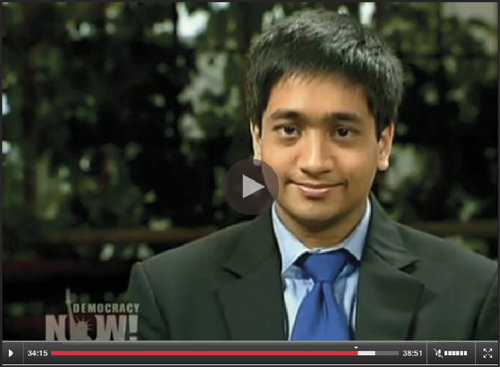 Clip from Democracy Now! interview with Mohamed Axam Maumoon, the 15-year-old environmental ambassador from the Maldives, challenges Western viewers by asking, “Would you commit murder?”

The lesson opens with a Democracy Now! interview with Mohamed Axam Maumoon, the 15-year-old environmental ambassador from the Maldives. Maumoon challenges Western viewers when he asks:

My final message will go generally out as a question. Would you commit murder? Our country, the Maldives—not only Maldives, but other countries such as Bangladesh, Kenya, and Zambia—all those countries are suffering to the point that we can’t see the end of it, because of the mistakes other countries are making. And it’s as good as killing us off. So I ask you again, would you commit murder, even while we are begging for mercy and begging for you to stop what you’re doing, change your ways, and let our children see the future that we want to build for them?

After viewing the clip, participants were assigned the roles of groups at the Indigenous Peoples’ Global Summit on Climate Change. Their task was to develop a list of demands to present to the rest of the world at the U.N. climate change treaty meeting.

Participants jumped into their roles, negotiating with each other and recognizing the complexity of their task. The potential impact of the lesson was underscored by a poem written by a high school student who had done the same role play. The excerpt was read by one of the workshop participants:

Although there was only time to share a portion of the lesson, a show of hands revealed that many plan to make use of the lesson and the Democracy Now! video clips back in their own classrooms. 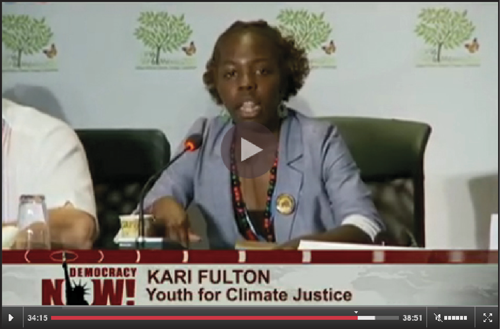 Where will you be in 2050? I know where I will be, and I want to live in a just and clean, sustainable world. We want people to know that whether you live in the forest, whether you live in the hood, you will be impacted by false solutions. And REDD, REDD-plus, REDD-minus-plus, REDD-plus-plus, whatever you want to call it, is a false solution, because you are creating a market on our forests. You are not protecting our Mother Earth.

This workshop demonstrated how the extensive archive of interviews on the Democracy Now! website and the lessons on the Zinn Education Project website create a powerful combination to address the silences in the media and textbooks.

Simin Farkhondeh, Education Director at Democracy Now!, is an award-winning filmmaker, artist, educator and activist. Her work has appeared on PBS, at the Whitney Museum, in the Margaret Mead Film Festival. She was co-director of the Deep Dish TV Series, Gulf Crisis TV Project, and director of the acclaimed monthly TV series Labor at the Crossroads (LABOR X).

We look forward to future Zinn Education Project and Democracy Now! collaborations. In the meantime, let us know if you have combined these two resources in your own classrooms. In appreciation, we will send you a DVD of the Democracy Now! segments used in this workshop.