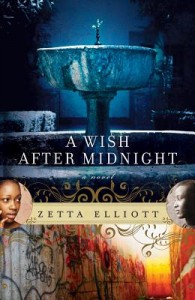 Genna is a fifteen-year-old girl who wants out of her tough Brooklyn neighborhood. But she gets more than she bargained for when a wish gone awry transports her back in time. Facing the perilous realities of Civil War-era Brooklyn, Genna must use all her wits to survive.

In the tradition of Octavia Butler’s Kindred and Madeleine L’Engle’s A Wrinkle in Time, A Wish After Midnight is the affecting and inspiring tale of a fearless young woman’s fight to hold on to her individuality and her humanity in two different worlds. [Publisher’s description.]

We also recommend the sequel, released in 2016, The Door at the Crossroads.

Zetta Elliott was born and raised outside of Toronto, Canada, but has lived and taught in Brooklyn for over ten years. An educator and a writer, Elliott has published numerous works of poetry, plays, essays, and children’s books, including Bird, her critically acclaimed picture book, which was released in 2008.