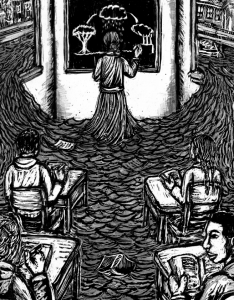 I sat on the tall stool, facing the class of 9th graders. I put a cigarette between my lips and flicked on the lighter.

“Anyone mind if I smoke?”

Yes, they did mind: “That’s disgusting.” “It’s against the law to smoke here.” “There’s secondhand smoke and it smells bad.”

I hoped this opening to a unit on climate change would underscore the idea that — even if students don’t have the vocabulary to express it — we are all familiar with the concept of the “commons.” In this classroom, we shared a breathing commons, and I didn’t have to convince students that no one had an individual right to pollute it with cigarette smoke. I hoped the cigarette-in-the-classroom stunt would work as a metaphor: the earth’s atmosphere is just a bigger version of the classroom — a finite “commons” that none of us owns, but that each has a stake in.

I’ve become convinced that climate change — global warming, climate chaos; call it whatever you like — is the biggest issue facing humanity. As the renowned environmental activist Bill McKibben points out, we need to understand

that the question is of transcendent urgency, that it represents the one overarching global civilizational challenge that humans have ever faced. . . The evidence gets worse by the day: already whole nations are evacuating, the Arctic is melting and we have begun to release the massive storehouse of carbon trapped under the polar ice. Scientists figure the “safe” level of carbon dioxide in the atmosphere is about 350 parts per million. . . Go beyond it for very long and we will trigger “feedbacks” that will result in runaway warming spiraling out of any human control and resulting in a largely inhospitable planet.

Tim Swinehart, active in our Portland, Oregon, Area Rethinking Schools “earth in crisis” curriculum workgroup, had invited me to co-teach a several-week unit on global warming to his 9th-grade global studies students at Lincoln High School. Tim and I teach social studies, not science. We knew that we were ill-equipped to offer the kind of hard scientific instruction that would help students grasp exactly how and why the climate is changing. But just as all of us are responsible for the atmospheric commons, climate change falls into a curricular commons; Tim and I were committed to explore the social impact of global warming as well as some of its social roots. How the six billion metric tons of CO2 we pump annually into the atmosphere affects the earth’s natural systems may be a scientific question. Why we do this, who it affects, and, at least in part, how we can stop it — these are social questions.

We especially wanted students to appreciate the inequality at the heart of climate change: those who have the smallest carbon footprint are the ones most victimized by its consequences. We wanted students to probe beneath the glib “buy green” solutions to global warming. And Tim and I knew that in this unit we would toe a fine line between communicating the vast dangers of global warming and encouraging students to recognize their power to make a difference. . .

Continue reading about how Bill Bigelow teaches the climate crisis through activities available on this website.

This article about various teaching activities originally appeared in A People’s Curriculum for the Earth.

Teaching the Truth About Climate Change Is Up to Us, Because Textbooks Lie

Article. By Bill Bigelow. Rethinking Schools, Spring 2018.
Every single one of the texts adopted in Portland, known for being green and liberal, misleads young people about the climate crisis.