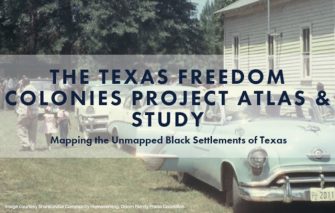 The Texas Freedom Colonies Project Atlas & Study documents Black settlement heritage and grassroots preservation practice among descendants of these historic communities. Freedom colonies (an umbrella term for Black settlements, Black towns, enclaves, or freedmen’s towns) are everywhere — hidden behind the pine curtain of the rural countryside and underneath the concrete landscapes of Houston, Dallas, Austin, and Beaumont. Though descendants live throughout the state or even the world, they return to preserve cemeteries, attain historic markers, & rehabilitate their homesteads.

African Americans founded “freedom colonies,” across Texas from 1866-1930 (from Juneteenth through the end of the Depression Era). Often unmapped and absent from public records, freedom colonies’ place names and histories are often buried in the memories of elders and Baby Boomers. [Description from the website.] 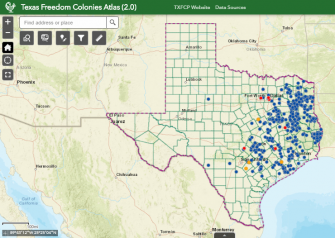 The Freedom Colonies Project is a community project that encourages volunteers to submit grassroots research, oral histories, and family history to collect data on settlements. It also supports students interested in designing research projects around the existing data or around collecting data for the map. See examples of student projects at its website.