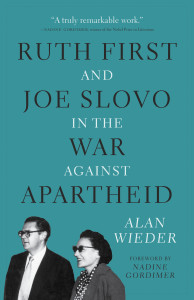 Ruth First and Joe Slovo, husband and wife, were leaders of the war to end apartheid in South Africa. Communists, scholars, parents, and uncompromising militants, they were the perfect enemies for the white police state. Together they were swept up in the growing resistance to apartheid, and together they experienced repression and exile. Their contributions to the liberation struggle, as individuals and as a couple, are undeniable. Ruth agitated tirelessly for the overthrow of apartheid, first in South Africa and then from abroad, and Joe directed much of the armed struggle carried out by the famous Umkhonto we Sizwe. Only one of them, however, would survive to see the fall of the old regime and the founding of a new, democratic South Africa.

Ruth First and Joe Slovo in the War Against Apartheid, the first extended biography of Ruth First and Joe Slovo, is a remarkable account of one couple and the revolutionary moment in which they lived. Alan Wieder’s heavily researched work draws on the usual primary and secondary sources but also an extensive oral history that he has collected over many years. By intertwining the documentary record with personal interviews, Wieder portrays the complexities and contradictions of this extraordinary couple and their efforts to navigate a time of great tension, upheaval, and revolutionary hope.

Alan Wieder’s Ruth First and Joe Slovo in the War against Apartheid is a remarkable political biography of two activists who devoted their lives to the struggle for equality in South Africa. For their part in the fight against apartheid, Joe Slovo and Ruth First were hunted and persecuted by the regime. Both were arrested, banned from speaking, exiled and targeted by the apartheid regime’s killers. Slovo, although more centrally involved in the armed fight against apartheid, survived to serve in Mandela’s government in 1994, but First was assassinated by the regime in 1982.

Ruth First and Joe Slovo are arguably among the most important of the anti-apartheid activists. They remained at the heart of the struggle throughout their lives, although their contributions to it were very different. First was a journalist, an academic, a teacher, and a public intellectual who contributed to the worldwide understanding of apartheid. Slovo was one of the principal leaders of the armed fight against the regime as a founding member, organizer and chief tactician of Umkhonto we Sizwe (MK) [the armed wing of the African National Congress (ANC)]. He oversaw the training of MK fighters in Angola, and masterminded many of its successful operations, such as its attack on the SASOL oil refinery in 1980.

The couple met at the University of the Witwatersrand during anti-racist activities of the Communist student association. Joe Slovo had returned from fighting in the South African army during the Second World War, where he was witness to the cruel irony that even during the war no black South African was allowed to bear arms. He wrote that if a black man “wanted to serve democracy he could do so wielding only a knobkierie (fighting stick, club), as a uniformed manservant of a white soldier” (p.45). Slovo studied law alongside Mandela, and became a practicing lawyer who defended blacks who were detained under the apartheid regime. Ruth First became a journalist and later editor at the Johannesburg Guardian the paper was forced to change its name many times due to government censorship — and documented the brutality of the regime against the black population.

Weider does not shy away from the contradictory position that Slovo and First occupied as white, middle-class activists in a largely black struggle. Their experience of the anti-apartheid struggle was very different to that of the black activists. Although both suffered severe persecution at the hands of the apartheid regime, and both were imprisoned — Ruth First particularly brutally, spending 117 days in solitary confinement without being charged with an offence — as Weider makes clear, even in prison they had a “white” experience that cannot be compared to the treatment of the black activists. Slovo himself, remarking on the fact that all the prison diaries were written by white comrades, reflects that, “as bad as [prison] was for whites, it was bearable. But for blacks it was hell and they didn’t want to speak about it” (p.283).

When the couple entered political exile in London in 1964, Slovo threw himself into party work, and maintained his leadership of MK’s armed activity. He organised the MK’s military incursions into South Africa and sabotage operations from the ANC’s offices in Goodge Street, around which buzzed a lively expatiate community of South African political exiles, including Yusuf Dadoo and Ronnie Kasrils.

Ruth First used the exile period to write and study. In London, as she started to become known as a public intellectual, she expounded a unique perspective on the South African political situation. She gave public speeches at Trafalgar Square, and her wide-ranging intellectual activity during this period included work on Frantz Fanon, and a study with Jonathan Steele of the London Guardian into the mutually supportive relationship between large-scale capitalism and the apartheid regime.

When the couple returned to Africa to be more closely involved in the struggle in 1977 — Ruth First, in particular, was uncomfortable being so distant from the activists who remained in Africa — the difference between their methods became even clearer. Slovo principally spent his time overseeing the military camps in Angola, where the MK’s fighters were being trained. By the late 1970s, he had become “the principal teacher in the military at the time, the theoretical, strategy side of things” (p.213). He learned from a number of revolutionary sources, applying their methods to the South African struggle. In 1978 he was part of a group of MK leaders who traveled to Vietnam to learn from the successful guerrilla war there.

Ruth First settled in Mozambique and, until her assassination in 1982, taught at the Centre for African Studies in Maputo, where she developed a radical socialist pedagogical method that combined teaching with “direct revolutionary force” (p.225). This was both a world away from Slovo’s military approach to the struggle, and a means of combining the diffuse aspects of her life’s work; in Maputo the “political struggle was directly integrated into her everyday work of teaching, research and writing” (p.226).  . . .

[Weider’s] interviews flesh out the political and historical context from the perspective of those who were involved in it, such as former members of MK, while allowing the complexities of First’s and Slovo’s personalities to emerge. Their passion and commitment to the struggle becomes more comprehensible through the eyes of those who knew them closely. This timely book should be read by all who seek to understand the remarkable couple and the struggle against apartheid in South Africa in depth.
Facebook
Twitter
Google plus
LinkedIn
Print
Order online