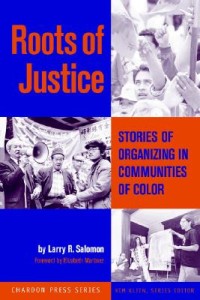 With a foreword by Elizabeth Martinez, Roots of Justice recaptures some of the nearly forgotten histories of communities of color. These are the stories of people who fought back against exploitation and injustice–and won. From the Zoot Suiters who refused to put up with abuse at the hands of the Navy, to the women who organized the welfare rights movement of the 1970s, Roots of Justice shows how, through organizing, ordinary people have made extraordinary contributions to change society.

Larry Salomon teaches ethnic studies at San Francisco State University. The stories in this collection are based on his “Movement History” column which appeared in Third Force magazine from 1994 through 1997.