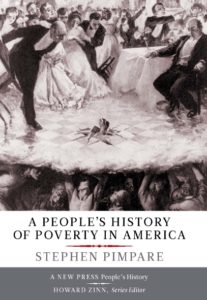 In this compulsively readable social history, a brilliant new addition to The New Press’s acclaimed People’s History series, political scientist Stephen Pimpare vividly describes poverty from the perspective of poor and welfare-reliant Americans from the big city to the rural countryside. He focuses on how the poor have created community, secured shelter, and found food and illuminates their battles for dignity and respect.

Through prodigious archival research and lucid analysis, Pimpare details the ways in which charity and aid for the poor have been inseparable, more often than not, from the scorn and disapproval of those who would help them. In the rich and often surprising historical testimonies he has collected from the poor in America, Pimpare overturns any simple conclusions about how the poor see themselves or what it feels like to be poor — and he shows clearly that the poor are all too often aware that charity comes with a price. It is that price that Pimpare eloquently questions in this book, reminding us through powerful anecdotes, some heart-wrenching and some surprisingly humorous, that poverty is not simply a moral failure.  [Publisher’s comments.]