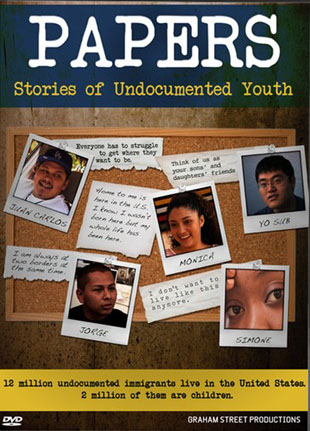 Papers is the story of undocumented youth and the challenges they face as they turn 18 without legal status. Approximately 65,000 undocumented students graduate every year from high school without “papers.” Currently, there is no path to citizenship for most of these young people.

The film premiered in 2009 when very few undocumented young people were public about their immigration status. The five young people featured in this film (Monica, Jorge, Juan Carlos, Simone and Yo Sub) risked arrest, detention and deportation simply for telling the truth about their lives. Their families, hometowns and last names are not revealed because of this concern.

The creative and heroic activism of the undocumented immigrant youth movement forced a vote on the DREAM Act in December 2010 where it passed in the House of Representatives but the Senate failed to overcome a filibuster. Intensified undocumented youth activism led to President Obama’s June 15, 2012 Executive Action, Deferred Action for Childhood Arrivals or DACA. The undocumented youth movement continues to advocate for immigration reform with a path to citizenship. Graham Street Productions produced this film in association with El Grupo Juvenil (the “Papers” Youth Crew). These youth producers were actively involved in all aspects of production. 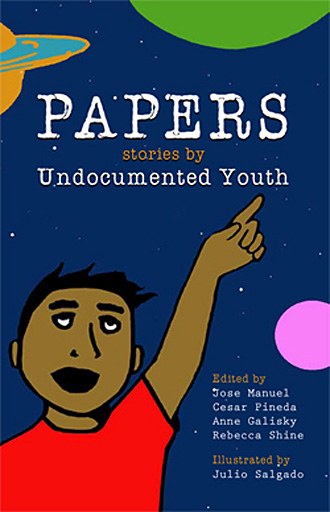 Book – Non-fiction. Edited by José Manuel, Cesar Pineda, Anne Galisky, and Rebecca Shine. Illustrated by Julio Salgado. 2012. 84 pages.
Undocumented youth from around the world tell their stories with simplicity and intimacy in this student-friendly collection.

This volume builds on the excellent 2009 film Papers: Stories of Undocumented Youth. Papers — the book — is a student-friendly collection that continues the conversation begun in the film; undocumented youth from around the world tell their stories with simplicity and intimacy. The passages are short, poignant, evocative, and lend themselves to lots of classroom uses. Julio Salgado’s illustrations — in colors that shout with life and dignity — help make this an inviting book for all. Middle and high school.