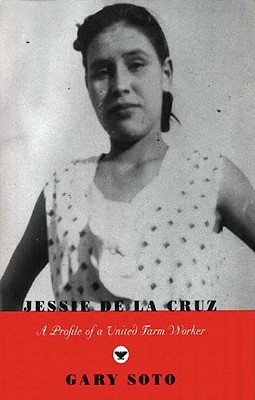 This inspiring story of Jessie De La Cruz, the United Farmer Workers, and la Causa is told as only Gary Soto — novelist, essayist, poet, and himself a field laborer during his teens — can tell it, with respect, empathy, and deep compassion for the working poor.

A field worker from the age of five, Jessie knew poverty, harsh working conditions, and the exploitation of Mexicans and all poor people. Her response was to take a stand. She joined the fledgling United Farm Workers union and, at Cesar Chavez’s request, became its first woman recruiter. She also participated in strikes, helped ban the crippling short-handle hoe, became a delegate to the Democratic National Convention, testified before the Senate, and met with the Pope.

Jessie’s life story personalizes an historical movement and shows teens how an ordinary woman became extraordinary through her will to make change happen, not just for herself but for others. [Publisher’s description.]