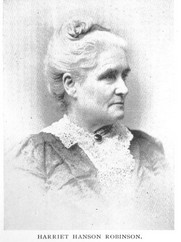 Harriet Hanson Robinson  began working in the textile mills when she was ten years old. Boston capitalist began building mills and hiring young women from rural New England as their labor force assuming them to be docile. Instead they organzied  and agitated for better working conditions.

Harriet Hanson Robinson recalls a “turn out” or strike and the working conditions of the women in the factory in the 1830s. Robinson’s account is read by Lili Taylor on October 22, 2004, at The New York Society for Ethical Culture, New York, NY. The excerpt is from Voices of a People’s History of the United States edited by Howard Zinn and Anthony Arnove.

Lili Taylor reads Harriet Hanson Robinson’s Characteristics of the Early Factory Girls (1898), recalling a strike in the 1830s from Voices of a People’s History on Vimeo.