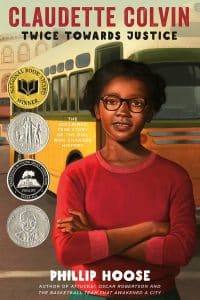 I could not move, because history had me glued to the seat. It felt like Sojourner Truth’s hands were pushing me down on one shoulder and Harriet Tubman’s hands were pushing me down on another shoulder, and I could not move. And I yelled out, ‘It’s my constitutional rights,’ because I wasn’t breaking a law under the state’s law, separate but equal; I was sitting in the area that was reserved for black passengers. — Claudette Colvin, 2013 interview on Democracy Now

On March 2, 1955, 15-year-old Claudette Colvin was arrested when she refused to give her seat to a white woman on a segregated bus in Montgomery, Alabama. She was inspired by school lessons on the Constitution during Black History Month.

The website based on the book, The Rebellious Life of Mrs. Rosa Parks, explains what happened with her case,

Colvin’s case went to trial in May. Colvin had been charged with three crimes. The judge strategically dropped two of the charges (for disturbing the peace and breaking the segregation law) but found her guilty on the third for assaulting the officers who arrested her. Since Colvin had only been convicted of assault, appealing her case could not directly challenge the segregation law.

Colvin had been a member of the NAACP Youth Council before the arrest and continued to attend Youth Council meetings. Rosa Parks made Colvin secretary of the council, trying to nurture the young woman’s spirit and budding leadership. Continue reading. Portrait of Claudette Colvin by Robert Shetterly, available as a poster from Americans Who Tell the Truth. (Click image to learn more.)

Colvin signed on to be a key plaintiff in Browder v. Gayle, the landmark case that struck down the segregation laws of Montgomery and swept away the legal underpinnings of the Jim Crow South.

…as a teenager, I kept thinking, Why don’t the adults around here just say something? Say it so that they know we don’t accept segregation? I knew then and I know now that, when it comes to justice, there is no easy way to get it. You can’t sugarcoat it. You have to take a stand and say, ‘This is not right.’ And I did.

The book Claudette Colvin: Twice Toward Justice is based on extensive interviews with Claudette Colvin and many others. It can be used to bring the story of Colvin and the historic Montgomery Bus Boycott to middle school readers.

Claudette Colvin was a remarkable teenager. With great courage she acted upon her principles — and played a significant role in the drama of the civil rights movement. This is a story that if taught in every classroom in the nation, might well inspire a new generation of young activists to join the on-going struggle for social justice. —Howard Zinn, author of A People’s History of the United States

Find stories of resistance to segregated transportation dating back to 1841.