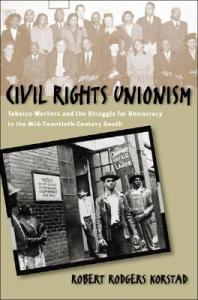 Drawing on scores of interviews with African American and white tobacco workers in Winston-Salem, North Carolina, Robert Korstad brings to life the forgotten heroes of Local 22 of the Food, Tobacco, Agricultural and Allied Workers of America-CIO. These workers confronted a system of racial capitalism that consigned African Americans to the basest jobs in the industry, perpetuated low wages for all southerners, and shored up white supremacy.

Galvanized by the emergence of the CIO, African Americans took the lead in a campaign that saw a strong labor movement and the re-enfranchisement of the southern poor as keys to reforming the South—and a reformed South as central to the survival and expansion of the New Deal. In the window of opportunity opened by World War II, they blurred the boundaries between home and work as they linked civil rights and labor rights in a bid for justice at work and in the public sphere.

But civil rights unionism foundered in the maelstrom of the Cold War. Its defeat undermined later efforts by civil rights activists to raise issues of economic equality to the moral high ground occupied by the fight against legalized segregation and, Korstad contends, constrains the prospects for justice and democracy today. [Publisher’s description.]

A jazz opera, based on the story in Civil Rights Unionism, has been produced by Steve Jones and Elise Bryant. It is called Love Songs from the Liberation Wars: The 1940s Tobacco Workers Struggle. Watch the trailer below and contact the Labor Heritage Foundation if you have any leads on funding for this beautiful, educational performance.