Howard Zinn, author of A People’s History of the United States, one of the country’s most widely read history books, died on January 27, 2010. Shortly after, then-Governor of Indiana Mitch Daniels got on his computer and fired off an email to the state’s top education officials: “This terrible anti-American academic has finally passed away.”

But Gov. Daniels, now president of Purdue University, was not content merely to celebrate Howard Zinn’s passing. He demanded that Zinn’s work be hunted down in Indiana schools and suppressed: “The obits and commentaries mentioned his book ‘A People’s History of the United States’ is the ‘textbook of choice in high schools and colleges around the country.’ It is a truly execrable, anti-factual piece of disinformation that misstates American history on every page. Can someone assure me that is not in use anywhere in Indiana? If it is, how do we get rid of it before more young people are force-fed a totally false version of our history?”

We know about Gov. Daniels’ email tantrum thanks to the Associated Press, which obtained the emails through a Freedom of Information Act request.

Scott Jenkins, Daniels’ education advisor, wrote back quickly to tell the governor that A People’s History of the United States was used in a class for prospective teachers on social movements at Indiana University.

Daniels fired back: “This crap should not be accepted for any credit by the state. No student will be better taught because someone sat through this session. Which board has jurisdiction over what counts and what doesn’t?”

After more back and forth, Daniels approved a statewide “cleanup” of what earns credit for professional development: “Go for it. Disqualify propaganda and highlight (if there is any) the more useful offerings.” 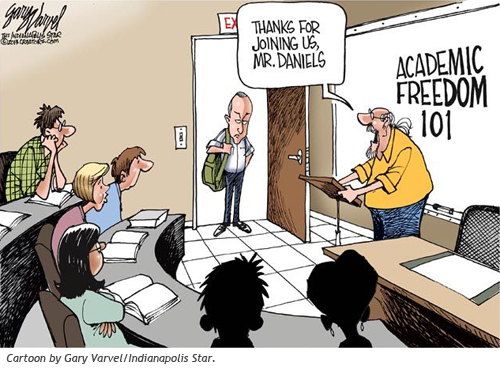 Daniels recently defended his attack on Zinn’s work, telling the Associated Press, “We must not falsely teach American history in our schools.” In a letter posted on his Purdue University webpage, Daniels claimed that, “the question I asked on one day in 2010 had nothing to do with higher education at all.” Daniels should go back and read his own emails.

There are so many disturbing aspects to this story, it’s hard to know where to begin.

The first, of course, is Daniels’ gleeful, mean-spirited reporting of Zinn’s death. Anyone with even a passing familiarity with Howard Zinn’s career knows that his great passions were racial equality and peace. Finding cause for joy in the death of someone whose life was animated by confidence in people’s fundamental decency is shameful.

As someone who spent almost 30 years as a high school history teacher, I’m amused by the impoverished pedagogical vision embedded in Daniels’ emails and subsequent defense. Daniels wants Zinn’s A People’s History of the United States banned from the curriculum, so that the book is not “force-fed” to students. Governor Daniels evidently assumes that the only way one can teach history is to cram it down students’ throats. To see some alternative ways to engage students, Daniels might have a look at our lessons at the Zinn Education Project, which use Zinn’s People’s History of the United States in role plays, in critical reading activities, to generate imaginative writing, and to search for the “silences” in students’ own textbooks.

Take for example the last textbook I was assigned as a teacher at a public high school in Portland, Oregon, American Odyssey, published by Glencoe/McGraw-Hill. In the book’s one thousand pages, it includes exactly two paragraphs on the U.S. war with Mexico — the war that led to Mexico “ceding,” in the polite language of school curricula, about half its country to the United States. American Odyssey does not quote a single Mexican, a single soldier, a single abolitionist, a single opponent of the war. Well, in fact, the textbook doesn’t quote anyone. As one of my students pointed out when we read the book’s dull passages in class, “It doesn’t even view it as a war. It’s a situation.”

This scant treatment of such an important event in U.S. and Mexican history is one reason why teachers search out alternatives like A People’s History of the United States, which includes a full chapter on the conflict, focusing especially on President Polk’s hollow justifications for war, the anti-war resistance, and the human impact of the war. Unlike the gray prose of textbooks like American Odyssey, Zinn’s chapter on the U.S. war with Mexico — “We Take Nothing by Conquest, Thank God” — is filled with quotes from soldiers and poets, surgeons and abolitionists, generals and journalists, clergymen and presidents. Every passage reminds young people that war is much more than a “situation.”

“We must not falsely teach American history in our schools,” said Daniels to the Associated Press, implying that the true history is to be found in the officially adopted textbooks. As the Zinn Education Project reveals regularly in its If We Knew Our History column, the version of U.S. history taught in the textbooks produced by giant corporations is anything but “true.” The corporate textbooks hide the breadth of U.S. military and economic interventions throughout the world; they ignore the roots of today’s environmental crises; they refuse to explore the origins of the vast wealth inequality in the United States; and the textbooks neglect the role of social movements throughout U.S. history, instead focusing on famous individuals; thus, they fail to nurture an activist sensibility — a recognition that if we want the world to be better, then it’s up to us to make it better.

This is a point Howard Zinn emphasized when he spoke to teachers at the 2008 National Council for the Social Studies conference in Houston — some of them from Indiana! — not much more than a year before he died. Zinn said: “We’ve never had our injustices rectified from the top, from the president or Congress, or the Supreme Court, no matter what we learned in junior high school about how we have three branches of government, and we have checks and balances, and what a lovely system. No. The changes, important changes that we’ve had in history, have not come from those three branches of government. They have reacted to social movements.”

Governor Daniels’ advisers evidently found no evidence that Zinn’s A People’s History of the United States was in use in K-12 schools in Indiana. I guess they didn’t look hard enough. There are more than 300 Indiana teachers registered at the Zinn Education Project to access people’s history curriculum materials to “teach outside the textbook.” And these are only the teachers who have formally registered at the site; many more share people’s history-inspired lessons.

And at the Zinn Education Project we’ve heard all week long from Indiana teachers, professors, and parents who have committed themselves to work against censorship in K-12 schools. Their defiance is reminiscent of Indiana’s Green Feather Movement that challenged the McCarthy-era attempt to ban Robin Hood from the elementary school curriculum in 1954. What began as the anonymous posting of green feathers on bulletin boards by a few students at Indiana University spread to campuses across the country. As Howard Zinn wrote at the end of his autobiography, You Can’t Be Neutral on a Moving Train, “If we remember those times and places — and there are so many — where people have behaved magnificently, this gives us the energy to act, and at least the possibility of sending this spinning top of a world in a different direction.”