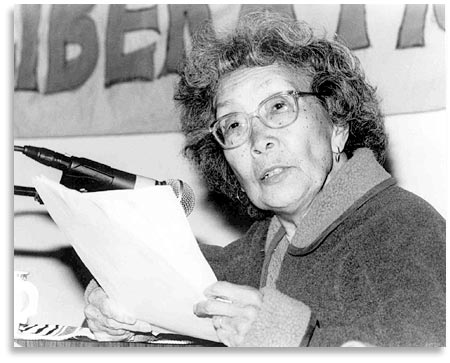 Yuri Kochiyama speaking at the Resist the Silence program at the SF Women’s Building on 9/14/2002. Image: Bruce Akizuki.

Lifelong freedom fighter Yuri Kochiyama passed away on June 1, 2014 at the age of 93.

Yuri Kochiyama is most widely known for being outspoken against the World War II arrest and internment of Japanese Americans in conditions that literally killed her father. (See “Then Came the War.”) Many people have also heard of her presence on the stage at the Audubon Ballroom with Malcolm X on the day he was killed.

However, as documented in her biography Passing It On and the film Passion for Justice, Kochiyama’s activism spanned many decades, issues, and strategies. 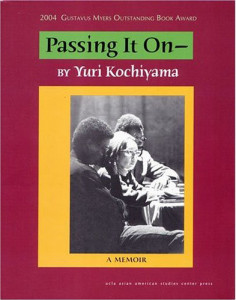 that remembrances of Yuri Kochiyama don’t start and end with the snapshot of her caretaking Malcolm X in his last moments, just like the tributes that reduced Rev. Vincent Harding to only being Dr. Martin Luther King’s speechwriter.

It compounds the tragedy when people, who represent the grassroots and plural nature of the 60s movement, are reduced upon death to their relationship with Great Men.

What I will remember about Yuri Kochiyama is her careful attention to mentoring and cultivating relationships. The salons she held in her apartment were influential to so many. They are mentioned in several books. She also dutifully collected and saved things.

Kochiyama came to the 1995 round-table on African American liberation movement leader Mae Mallory with a scrapbook full of memories, newspaper articles and the like. I have come across many of her handwritten letters in different archives.

It is a little known fact, for example, that in 1977, “Kochiyama joined the group of Puerto Ricans that took over the Statue of Liberty to draw attention to the struggle for Puerto Rican independence.” 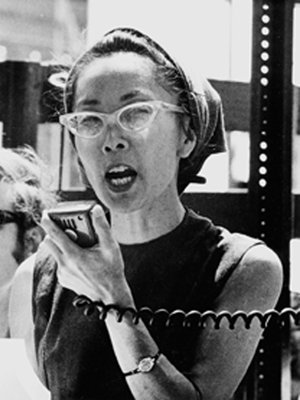