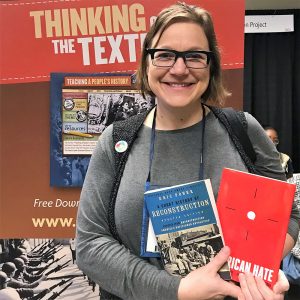 Adapting Adam Sanchez’s lesson, Poetry of Defiance: How the Enslaved Resisted, for online learning was a labor of love. The Rethinking Schools/Zinn Education Project’s mixer activities have been a catalyst for understanding in my classroom; I couldn’t imagine any space — even at a distance — that didn’t include that power.

The first hurdle to overcome was the difference in participation between a captive audience in class and students logging in when they can at home. There are the logistics of asynchronous participation which come from any online learning scenario. And there is particular care to be taken specifically during the COVID-19 outbreak, when families are experiencing stress and upheaval at home.

The following chronicles my attempt at making this lesson accessible to students at home. To prepare to use it yourself, read Adam Sanchez’s full lesson first.

I broke the lessons into “steps” rather than “days,” to prevent kids from feeling behind or constricted by time, while still structuring the lesson with forward, incremental progression. The longer I do this work online, the more I realize I’m moving too fast. So I slow down the pace, and it’ll still be too fast. The steps make it easier to chunk the lessons and find that sweet spot for a particular cohort of kids.

With the most social part of the lesson becoming independent, I had to rely on the discussion questions and the group-creation of the poem to give us the community of doing this together. I require students to reply to one other person, to encourage them to read each other’s ideas. If one has the good fortune of being able to host full-class online meetings, of course, a face-to-face discussion would be better.

As Sanchez suggests, I begin the lesson with a simple question: Who Freed the Slaves? [See slides.] I post this as a private single reply question (as opposed to the discussion-type we have next), as it is meant to give me and each student a baseline of where their thinking starts in this journey. The range of answers 8th graders give me is impressive. There are many you would expect, giving credit to Abraham Lincoln (sometimes the answer literally being only those two words), but some answers are more complex. One student wrote,

Next, I asked the students to reflect on the quote about the economics of slavery. Sanchez says this helps students anticipate some of the forms of oppression they will encounter in the mixer activity. I required them simply to post an answer to one of the following questions: Why was the labor of enslaved people so important to the economy? What power did enslaved people have? What could they do to resist? What prevented them from resisting? And to reply to one other student’s response. They almost all seemed to get the idea that enslaved people risked violence if they resisted, (but few answered with other kinds of resistance like learning to read or trying to keep the family together) and they all seemed to understand that enslaved labor provided profits for the elite. They also knew that despite the risks, enslaved people would do all they could to escape if possible. The important part of this step is just to bring all of this to the front of their minds. 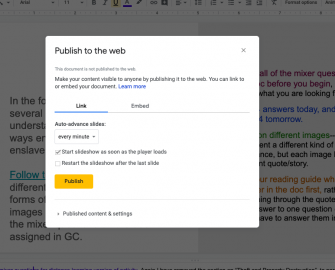 In the self-contained slide show, students clicked on images that took them to quotes, which helped them answer the mixer questions.

For the actual mixer part of the lesson, I couldn’t expect to have all students together, so I created an independent activity that would still motivate them to search for information “in the room.” In the self-contained slide show, students click on images that take them to one of the quotes that will help them answer the mixer questions. I posted it as a link in the “Who Freed the Slaves” slideshow by publishing to the web and selecting the longest auto-advance option (one minute) and toggling “start slideshow as soon as the player loads” in order to preserve the game feel.

I broke it into two days because it is very text-heavy. I knew students did not have the reading support they would at school. These tips became essential:

Read all of the mixer questions on the doc before you begin, so you know what you are looking for.

Find four answers today, and the other four tomorrow. Answer fully; a few-words answer is not enough.

Click on different images — they each represent a different kind of resistance, but each image has a different quote or story.

Let your reading guide what you answer first in the doc, rather than searching through the quotes to find the answer to one question. You do NOT have to answer them in order.

If I could do it over again, I would have made a screencastify about using the mixer slideshow.

To simplify the activity further, I removed one whole group of resistance (theft and property destruction) and chose just four of the six quotes in the remaining groups. It was still quite a lot of reading, especially for my English Language Learners.

The earlier responses to the discussion question in Step 1 were OK, but I wavered on whether the activity worked as a discussion in google classroom. Step 3 here showed me that it does work, and what I was seeing was a tentativeness in their answers before; now, after doing the mixer activity, kids had so much to say about the justification of slavery quote. Here is the quote: “The negro slaves of the South are the happiest, and in some sense, the freeest people in the world. The children and the aged and infirm work not at all, and yet have all the comforts and necessaries of life provided for them. They enjoy liberty, because they are oppressed neither by care or labor. The women do little hard work, and are protected from the despotism of their husbands by their masters.” As Sanchez explains in the lesson, “The quote is taken from an 1857 book written to justify slavery and was a typical pro-slavery argument that you would hear in both the South and the North. Ask students to identify how the stories of resistance they just learned about challenge this argument.”

The poetry writing turned out to be a beautiful culmination of this learning. I received dozens of stanzas, showing deep understanding:

Tell them that we resisted

That even when it was cold and cruel

We stayed in the protection of those dark woods

That despite the hateful words and abuse we faced

Love prevailed, we took comfort in each other

working to stay together with every fighting breath.

Finally, I asked students to reflect on the evolution of their thinking from the first time they answered, “Who Freed the Slaves?” I saw many students evolve in their understanding of the complexity of the answer to this. You can see the change here in one student’s responses before and after:

The person who freed the slaves was Abraham Lincoln. Lincoln issued his preliminary Emancipation Proclamation. So at the beginning of 1863 he would use all his war powers to free all slave states still in rebellion, after that there was a dramatic increase on escape attempts. But also 2 years of fighting changed what the Civil War was about, north didn’t just only fight to save the Union but also to free slaves and end slavery.

I don’t think it was one person who freed the slaves there where many people freeing them, all the revolts and times they protested. They slowly started to free themselves and they were very opportunistic, whenever there was a chance to run or protest they did. Most times when they ran away, they came back to get their family and take them with them. So I think they all worked on freeing themselves.

Some other things that students said about this lesson sequence:

I used to think that the north freed the slaves but throughout this lesson sequence, I learned that the slaves freed the slaves with the help of the north…. I really learned a lot by reading my classmates’ responses. . . . It wasn’t just Lincoln, he had to be shown that they needed to be free…The poem was cool because it summarized what I think slavery was about and how it was devastating at the personal level.

Read more teachers’ stories and submit your own story about teaching during the pandemic. In appreciation, the Zinn Education Project will send you a book or DVD .

Teaching People’s History in the Pandemic

While teaching remotely in the midst of a pandemic, we remain committed to building up and supporting our community of people's history teachers across the country. 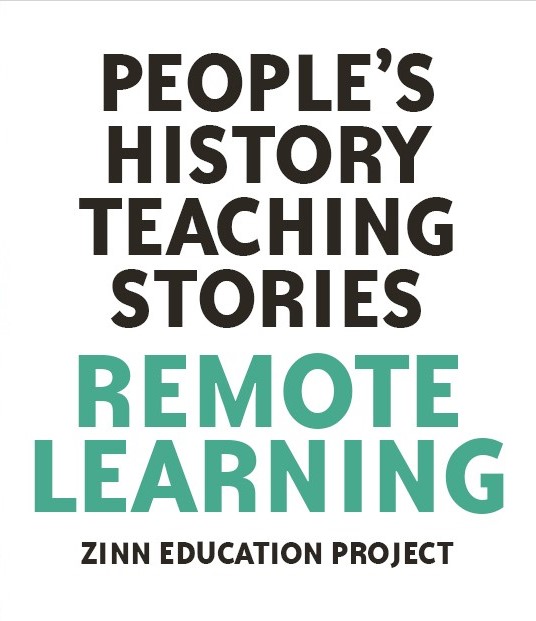 Teachers share how they teach history and engage their students during the 2020 pandemic.