On Nov. 15, 1917, about 20 women were subjected to beatings and torture at Occoquan Workhouse, a prison in Virginia, in what became known as the “Night of Terror.”

On the evening of Nov. 14, the superintendent ordered his guards to brutally assault imprisoned suffragists. This “Night of Terror” galvanized support for the women’s suffrage movement at a critical moment.

The tortured prisoners included activists Dorothy Day and Lucy Burns. Some were left for dead after the beatings. They had been arrested for peacefully picketing for universal suffrage in front of the White House. 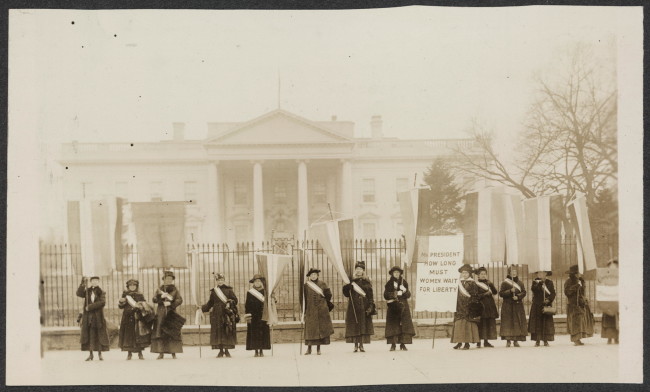 Suffragists picketing the White House in 1917. Source: Library of Congress.

President Woodrow Wilson had led the country into WWI to “make the world safe for democracy.”

The demonstrators called attention to the need for complete democracy at home, where women (and in many states, African Americans, Native Americans, Latinos) lacked complete voting rights.

“Seneca Falls, 1848: Women Organize for Equality” is a lesson on the early suffrage movement.