On August 13, 1910, a group of more than 150 ministers from Washington, D.C. wrote to President William Taft and the American people, urging action in response to the massacre in late July of African Americans in Slocum near Palestine, Texas.

The Slocum Massacre began July 29, 1910, when hundreds of white citizens from the surrounding community converged on Slocum. Terror reigned as African Americans were gunned down while working in fields and seeking shelter in their homes. While there has never been a clear figure of how many died, estimates range from two dozen to two hundred.

The ministers opened their letter with the explanation:

We have come together to make a sane protest to the reason and enlightened conscience of the great American people. We deplore the fact that a meeting such as this should be necessary. An impartial enforcement of law and unprejudiced treatment of citizens, regardless of ancestry, would leave little excuse for a meeting like this. 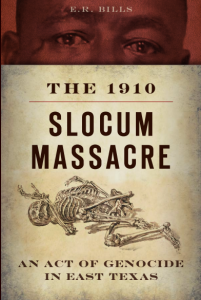 Unless something is done to make human life more valuable and law more universally respected, we feel that our beloved country is doomed to destruction at no distant date.

E.R. Bills, author of The 1910 Slocum Massacre: An Act of Genocide in East Texas, secured a copy of the ministers’ letter with a Freedom of Information Act (FOIA) request. He generously shared this primary document with the Zinn Education Project so that teachers can introduce students to the history. Below is a transcription of the cover letter, followed by image files of the cover letter to Taft and the four page letter to Taft and the American people.

The undersigned have been appointed a Committee by the Colored Ministers—numbering more that 150—of the city of Washington to convey to you the enclosed address to the President and the American people relative to the murdering of 20 or more innocent and unarmed colored men near Palestine, Texas recently. It is the hope of the colored Ministers if this city, and of the many thousands whom they represent, as well as the hope of the colored people throughout America, that you may use the powers of your great Office to suppress lynching, murder and other forms of lawlessness in this country.

According to the most recent and reliable statistics there are eight times more murders committed in the United States of America each year, than are committed in Great Britain, and six times more in France, and five times more than of the German Empire. Our Nation is already the laughing stock of civilized peoples throughout the world, and unless something is done to make human life more valuable and law more universally respected, we feel that our beloved country is doomed to destruction at no distant date. We believe that you are as much interested in the suppression of lawlessness and crime in this country as we are, and we feel confident that you will do all in your power to help bring about this much to be desired end.

We beg, sir, to remain