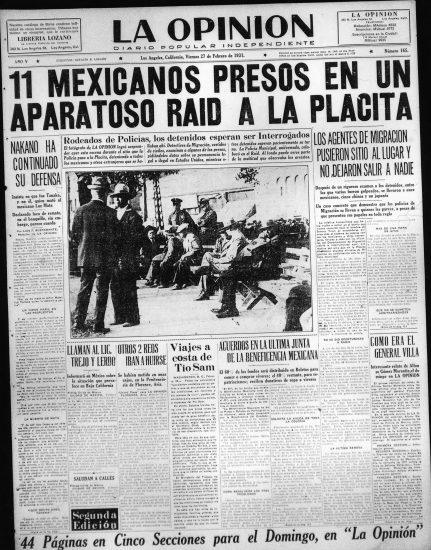 The La Placita Raid took place on Feb. 26, 1931 in Los Angeles. This was during an era when perhaps as many as 1.8 million adults and children — immigrant and U.S.-born, citizen and noncitizen, long-time residents and temporary workers — became the targets of a massive campaign of forced relocation, based solely on their perceived status as “Mexican.”

The La Placita park was a vibrant cultural hub in an immigrant neighborhood, a place to listen to music, talk politics, socialize. According to historian Doug Monroy, “In the days before television and radio, if you wanted stimulation and excitement, you went to La Placita.”

On a sunny afternoon in late February, the park was full of close to 400 people when suddenly immigration agents sealed off the exits. Some were in military olive uniforms, others in plain clothes, wielding guns and batons. The agents demanded everyone in the park line up and show their papers. They arrested dozens and deported many.

But the greatest impact was psychological, instilling terror into the Mexican American community.

Read more this era in Downplaying Deportations: How Textbooks Hide the Mass Expulsion of Mexican Americans During the Great Depression by Ursula Wolfe-Rocca. Find a free downloadable lesson to teach about the deportations below.