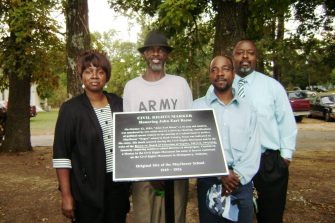 Children of Reese’s cousin, Johnnie Myrle Nelson. Nelson, 15-years-old at the time, was one of the cousins sitting with Reese in the café along when he was shot. The plaque was dedicated in 2010.

On Oct. 22, 1955, 16-yr-old John Earl Reese was in a café in Mayflower, Texas when white men fired nine shots in the window, killing him and injuring his cousins.

The white men were among those attempting to terrorize African American residents into giving up plans for a new school, soon after the Brown v. Board Supreme Court decision.

Read more in the files at Northeastern University Libraries and in an account of the case of John Earl Reese by the Civil Rights and Restorative Justice Project.

Below is a 17-minute documentary about three cold cases, including the cast of Reese.