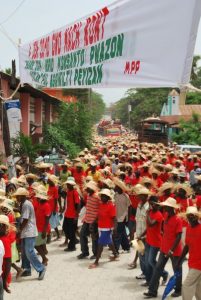 On June 4, 2010, approximately 10,000 Haitian farmers marched in protest and did something unexpected: they burned piles of seeds.

Why? Because the seeds they were setting on fire were hybrids donated by Monsanto.

These hybrid seeds were approved for donation by the Haitian Ministry of Agriculture; they are cross bred between two different species. Peasant farmers saw this donation as a detriment to local seed stocks and food sovereignty. If  the farmers planted these hybrids, the crops grown would not produce seeds that could be saved and used for the following year’s crop. Additionally, some of the seeds were treated with dangerous fungicides called Maxim XO thiram, which make the treated seeds dangerous to handle without protective clothing.

This “gift” from Monsanto came on the heels of the massive 7.0 magnitude earthquake that struck Haiti on January 12, 2010, killing 320,000 and displacing millions. Attempting to take advantage of the desperate situation of farmers in the country, Monsanto announced that they would donate 475 tons of hybrid corn and vegetable seeds. Peasant leader Chavannes Jean-Baptiste called the donation “a new earthquake” because of the threat these seeds posed to small-scale agriculture and biodiversity and the dependence on Monsanto that would be created by this donation.

In order to express their opposition to this so-called “gift,” farmers from around the country marched with banners and straw hats with the statement “ABA MONSANTO” (Down with Monsanto).

This act of resistance to Monsanto’s influence is described in the role for Haiti’s Group of Four and the Dessalines Brigade, in the lesson Food, Farming, and Justice: A Role Play on La Via Campesina. La Via Campesina is the largest social movement in the world, made up of over 200 million small farmers in 81 countries.

Whether it’s burning seeds that pose a threat to traditional agriculture in Haiti or occupying wealthy landowners’ land in Brazil, La Via Campesina is on the front lines of combating big agribusiness and climate change through food sovereignty. You won’t hear much about La Via Campesina in mainstream news or textbooks. Learn more and teach using the lesson, Food, Farming, and Justice: A Role Play on La Via Campesina, one of more than 80 lessons and articles in A People’s Curriculum for the Earth: Teaching Climate Change and the Environmental Crisis.

This post was prepared by Hannah Russell-Hunter during her Teaching for Change summer internship, drawing on the sources listed below.