The ninth president of Spelman College, Dr. Beverly Daniel Tatum, invited Howard Zinn to give the commencement speech in 2005. From 1956 to 1963, Zinn had taught at Spelman College. Read about his years there in Howard Zinn’s Southern Diary and reflections from his students including Marian Wright Edelman and Alice Walker. 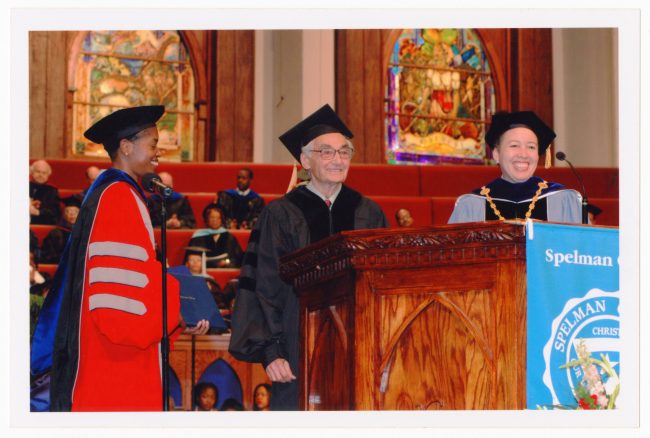 Dr. Tatum described what led her to invite Zinn to give the commencement address while speaking at the dedication of the Howard Zinn Room at Busboys and Poets in 2011. Her talk is in the video and transcript below.

But when I was teaching about the psychology of racism and using Rethinking Schools and getting to know Deborah Menkart at Teaching for Change, certainly I often referred students to read A People’s History of the United States.

So fast forward to 2002 and I am named the ninth president of Spelman College. And I have been there now ten years and it’s been a wonderful experience, and I’m honored to be here with our two graduates, Marian Wright Edelman and Bernice Johnson Reagon. We’re certainly thrilled to be here.

Spelman is an institution 130 years old with a very proud history and long-serving presidents. I am president number nine in that 130-year history. And when I got to Spelman, I learned about an infamous act on the part of president number five. President number five was Dr. Albert Manley, who was president for more than 20 years, and he was president during the time of the Civil Rights era and the president when Bernice and Marian were both students at Spelman and when Howard Zinn was a professor there.

And it was Dr. Manley who fired Howard Zinn, a tenured history professor, as legend has it, for insubordination.

Well, fast forward, so in 2004, there’s a sociology professor at Spelman during my tenure, Professor Harry Lefever who wrote a book about Spelman women and the history of the Civil Rights Movement called Undaunted By the Fight. And in the spring of 2004, Harry’s book was published and as part of the celebration of that, and also the 40th anniversary of the Civil Rights Act, he invited Howard Zinn back to speak.

And actually, it was as he told that story, it was the first time that I’d learned this particular piece of Spelman history and decided then that we needed to clean that up.

And so in Spring, May, 2005, we invited Marian Wright Edelman to be our commencement speaker, and we invited Howard Zinn to receive an honorary degree.

Actually, I am remembering that incorrectly. He got the honorary degree. Marian was actually the Founder’s Day speaker, as I recall. And it was actually Howard who was the commencement speaker.

And I should remember that because I’m getting ready to read you an excerpt of his commencement speech.

But it was really a wonderful experience because you don’t always get to do good things as president but that was something I felt really good about. And not only did I feel good about it, but his students, many of his former students were back for their reunion. As I recall it, Marian was celebrating her 45th reunion that year. There were others who had graduated in the class of 1965 and were back for reunions.

And we hosted a little reception for the class of 1965 and 1960 and Howard Zinn and it was wonderful to see his former students who had been so influenced by him to able to be reunited with him in this space as he was being honored by the institution that had treated him so badly 40 years before.

But I did want to on this occasion on International Peace Day, just read an excerpt from his speech, which was published in our Inside Spelman, back in the summer of 2005.

And I will take this opportunity to do that and I think that’s especially fitting given that today is International Peace Day.

My first hope is that you will not be too discouraged by the way the world looks at this moment. It is easy to be discouraged because our nation is at war. But let me tell you why you must not be discouraged. My hope is that your generation will demand an end to war. That your generation will do something that has not yet been done in history, to wipe out the boundaries that separate us from other human beings on this earth.

I was on the faculty of Spelman College for seven years from 1956 to 1963. My wife Roslyn and I and are two children lived on campus. Those years at Spelman were the most exciting years of my life, the most educational, certainly. I learned more from my students than they learned from me. I learned something about democracy, that it does not come from the government from on high. It comes from people getting together and struggling for justice.

I was lucky to be at Spelman at a time when I could watch a marvelous transformation in my students. When they were polite, so quiet. And then suddenly, they were leaving the campus and going into town and sitting in and being arrested and then coming out of jail full of fire and rebellion.

You can read all about that in Harry Lefever’s book Undaunted by the Fight. One day, Marian Wright, now Marian Wright Edelman, who was my student at Spelman and was the first arrested in the Atlanta sit-ins, came to our house on campus to show us a petition that epitomized the transformation that was taking place at Spelman College. Marian had written on top of the petition, “Young ladies who can picket, please sign below.”

My hope for you is a good life.