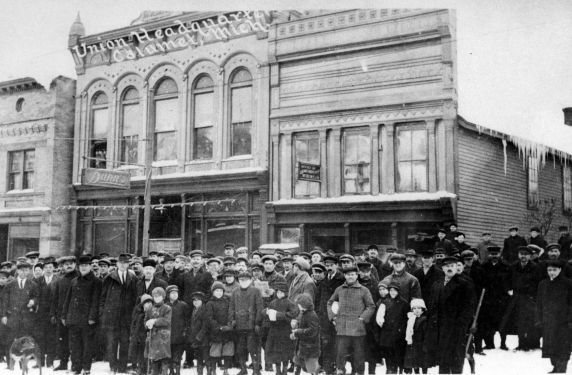 To offer some relief to the families of copper miners of Calumet who had been on strike, a holiday party was held at the Italian Hall in Calumet, Michigan. After the festivities had begun, someone — to this day, no one knows who — yelled “Fire!” In the rush for the stairs, 73 people (59 of them children) were crushed and suffocated to death on the stairway. There was no fire. It became known as the Italian Hall disaster.

Take a trip with me in 1913,
To Calumet, Michigan, in the copper country.
I will take you to a place called Italian Hall,
Where the miners are having their big Christmas ball.

I will take you in a door and up a high stairs,
Singing and dancing is heard everywhere,
I will let you shake hands with the people you see,
And watch the kids dance around the big Christmas tree.

— From the song 1913 Massacre by Woody Guthrie. Read the lyrics and/or listen to it sung by John McCutcheon.

In the version of events in Woody Guthrie’s song, the “copper-boss thug-men” had plotted to yell “Fire!” and were holding the door of the Italian Hall shut so that the miners and their families could not escape. The town itself is still divided over exactly what happened. [Description from 1913 Massacre film website.]

The Copper County Reflections website has photos of the morgue and funeral.

Below are resources for teaching outside the textbook about labor history.