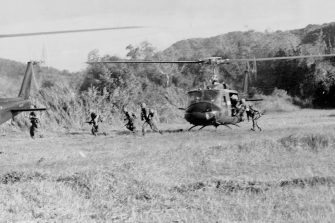 Often described as one of the first major battles between the U.S. and North Vietnamese, both sides claimed victory. Hundreds of U.S. and Vietnamese soldiers died.

Years later, Senior General Vo Nguyen Giap explained that careful study of U.S. tactics led to the confidence that the People’s Army would eventually win the war: “We thought that the Americans must have a strategy. We did. We had a strategy of people’s war….If we could defeat your tactics—your helicopters—then we could defeat your strategy.” (Source)

Teaching the Vietnam War: Beyond the Headlines is a free, downloadable collection of lessons for middle and high school from the Zinn Education Project on the Vietnam War, whistleblowers, and the anti-war movement.