Our only hope today lies in our ability to recapture the revolutionary spirit and go out into a sometimes hostile world declaring eternal hostility to poverty, racism, and militarism. With this powerful commitment we shall boldly challenge the status quo and unjust mores and thereby speed the day when every valley shall be exalted, and every mountain and hill shall be made low, and the crooked shall be made straight and the rough places plain …

Now let us begin. Now let us rededicate ourselves to the long and bitter—but beautiful—struggle for a new world. —Dr. Martin Luther King Jr.

On April 4, 1967, exactly one year before his assassination, Martin Luther King Jr. delivered a speech in New York City at Riverside Church on the occasion of his becoming co-chairperson of Clergy and Laymen Concerned About Vietnam (subsequently renamed Clergy and Laity Concerned). 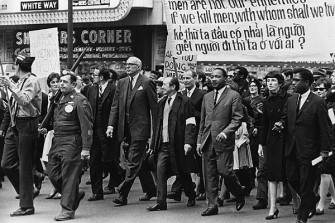 Titled “Beyond Vietnam,” it was his first major speech on the war in Vietnam—what the Vietnamese aptly call the American War.

His call for a “shift from a ‘thing-oriented’ society to a ‘person-oriented’ society” and for us to “struggle for a new world” has acquired even greater urgency than when he issued it decades ago.

Read more from the lesson A Revolution of Values. Read and listen to the Beyond Vietnam speech.

The Limits of Master Narratives in History Textbooks: An Analysis of Representations of Martin Luther King Jr.

Article. By Derrick Alridge. 2006. 25 pages.
Critique of textbook representation of Martin Luther King Jr. as messiah, embodiment of the Civil Rights Movement, and a moderate.