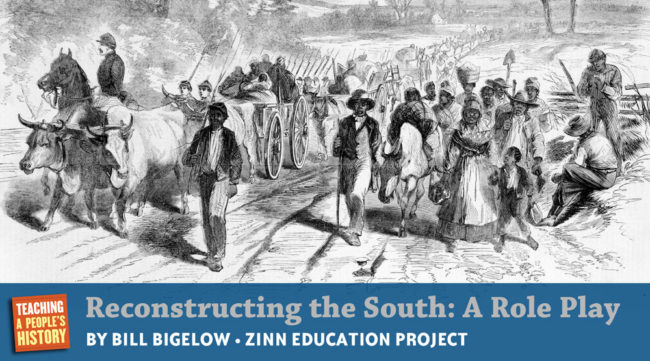 In popular culture, the most memorable depiction of Reconstruction was D.W. Griffith’s film, Birth of a Nation. Scalawags and carbetbaggers conspire with newly freed Blacks to ruin the South until the Ku Klux Klan arrives to save the day.

Missing from this racist portrait of Reconstruction — and from too many textbooks — was the extraordinary experiment in grassroots multiracial democracy this period represented — land reform, public schools, expanded voting rights, greater equality.

Reconstruction was the key turning point in U.S. history — a period of democratic promise like no other. But a promise foreclosed by the terrorism of the defeated white elites seeking to hold on to “their” South—and those in the North who may have opposed secession but had no interest in greater equality.

The Zinn Education Project commemorates the Reconstruction period with new curricula. We have just posted a new lesson, “Reconstructing the South: A Role Play,” written by Zinn Education Project co-director Bill Bigelow. It is accompanied by a chapter on land reform in the post-Civil War South from the American Social History Project’s important book, Freedom’s Unfinished Revolution.