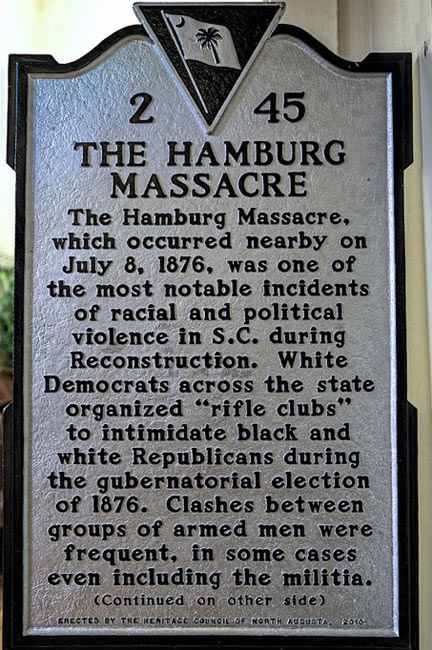 The Confederate flag represents a threat to citizens of color, a symbol of treason against the United States, and a war fought on behalf of slaveholders.

But there are other equally offensive symbols that have not attracted the attention they should. For example, a statue of former South Carolina governor and U.S. Senator Ben Tillman stands in the state Capitol. Tillman was an advocate of lynching. Tillman entered politics in 1875-1876, just before the end of Reconstruction, directing a mob called “The Red Shirts,” in a massacre in Hamburg, South Carolina. As Tillman himself would later put it, “The leading white men of Edgefield” had decided “to seize the first opportunity that the Negroes might offer them to provoke a riot and teach the Negroes a lesson” by “having the whites demonstrate their superiority by killing as many of them as was justifiable.”

Tillman was still around in 1907, regaling fellow senators with racial tirades: “I would lead a mob to lynch the brute who had ravished a woman.” He identified the brute as “negroes . . . a black flood of semi-barbarians,” “a lurking demon.” Whites, Tillman claimed, faced “an irrepressible conflict between civilization and barbarism.”

What about replacing Tillman with statues of heroic African American men and women who fled to Union lines and volunteered to help—thousands served as spies or in the Union Army and Navy. Or Robert Smalls and his enslaved crew who hijacked the Planter, a Confederate gunboat from Charleston Harbor, and sailed to the Union fleet?

What about a commemoration of the daring white and African American radical Republicans of South Carolina? In 1868, 76 African Americans and 55 whites wrote a new state constitution that promised equal justice for all. The new multicultural legislature (with a Black majority) opened public schools, reduced taxes for the poor, reformed prisons and the criminal code, and extended new rights to women.

What about a statue to celebrate Elias Hill, a formerly enslaved South Carolinian in York County? At age 5 he became too ill to stand or walk, or take care of his needs. Hill taught himself to read and write, and became an ordained Baptist minister and a community leader who started schools and taught adults citizenship rights.

Rev. Hill changed history when raiders from the huge Ku Klux Klan chapter in York beat him savagely. Hill was carried by relatives into federal court in York to testify against the KKK. Others were inspired to testify. Enough convictions followed to close the York County KKK. The York trials inspired successful federal prosecutions in other Southern states.

Rev. Hill was among many South Carolinians of both races who suffered while building a multiracial democracy. Many lost their jobs, some their lives, and others were driven into exile. After his testimony Hill had to flee to Liberia with his family and congregation.

Citizens in South Carolina and other states that have placed inciters of racial violence—like Sen. Ben Tillman—on pedestals should not only remove them but also begin a discussion on their replacements. This meaningful discussion and its choices would properly celebrate those ordinary people who—in the face of unrelenting murder and fear, including state-sponsored terror and federal indifference—rose to defend the rights of all people.

William Loren Katz is the author of 40 books on African American history, and has been associated with New York University as an instructor and Scholar in Residence since 1973. His website is www.williamlkatz.com. Read an interview with Katz about his life teaching and writing history.

3 comments on “It’s Not Just the Confederate Flag”