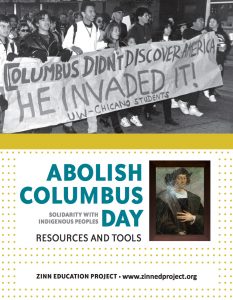 Click image to visit our campaign page with resources and promotional materials.

As the school year begins, an inspiring struggle is playing out in North Dakota. Led by the Standing Rock Sioux, Indigenous people from across the United States, Canada, and Mexico are gathering to oppose the $3.8 billion Dakota Access pipeline, which would threaten to contaminate the Missouri River.

Dave Archambault, chairperson of the Standing Rock Sioux Tribe, explains: “[I]t is a pipeline that is threatening the lives of people, lives of my tribe, as well as millions down the river. It threatens the ancestral sites that are significant to our tribe. And we never had an opportunity to express our concerns. This is a corporation that is coming forward and just bulldozing through without any concern for tribes.”

The “bulldozing” of Indigenous lives, Indigenous lands, and Indigenous rights all began with Columbus’s invasion in 1492. “With 50 men we could subjugate them all and make them do whatever we want,” Columbus bragged in his journal on his third day in the Americas. His policies in the Caribbean led to a horrific loss of life and culture. Columbus set the pattern for all subsequent European invasions.

Join us in abolishing Columbus Day and celebrating Indigenous People’s Day in our classrooms, our schools, our communities, and our country.