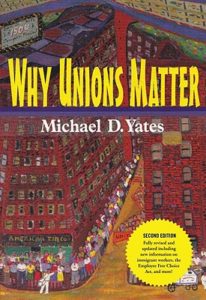 In this new edition of Why Unions Matter, Michael D. Yates shows why unions still matter. Unions mean better pay, benefits, and working conditions for their members; they force employers to treat employees with dignity and respect; and at their best, they provide a way for workers to make society both more democratic and egalitarian. Yates uses simple language, clear data, and engaging examples to show why workers need unions, how unions are formed, how they operate, how collective bargaining works, the role of unions in politics, and what unions have done to bring workers together across the divides of race, gender, religion, and sexual orientation.

The new edition not only updates the first, but also examines the record of the New Voice slate that took control of the AFL-CIO in 1995, the continuing decline in union membership and density, the Change to Win split in 2005, the growing importance of immigrant workers, the rise of worker centers, the impacts of and labor responses to globalization, and the need for labor to have an independent political voice. This is simply the best introduction to unions on the market. [Publisher’s description.]