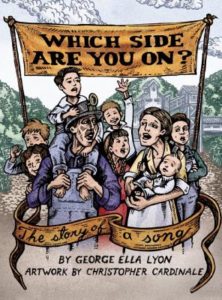 Which Side Are You On? tells the story of the classic union song that was written in 1931 by Florence Reece in a rain of bullets. It has been sung by people fighting for their rights all over the world. Florence’s husband Sam was a coal miner in Kentucky. Many of the coal mines were owned by big companies, who kept wages low and spent as little money on safety as possible. Miners lived in company houses on company land and were paid in scrip, good only at the company store. The company owned the miners sure as sunrise.

That’s why they had to have a union. Miners went on strike until they could get better pay, safer working conditions, and health care. The company hired thugs to attack union organizers like Sam Reece.

George Ella Lyon tells this hair-raising story through the eyes of one of Florence’s daughters, a dry-witted, pig-tailed gal whose vantage point is from under the bed with her six brothers and sisters. The thugs’ bullets hit the thin doors and windows of the company house and the kids lying low wonder whether they’re going to make it out of this alive; wonder exactly if this strike will make their lives better or end them, but their mother keeps scribbling and singing. “We need a song,” she tells her kids. That’s not at all what they think they need. Graphic novelist Christopher Cardinale brings Florence’s triumphant story to life in true rip-roaring union style. [Publisher’s description.]

Ideal for grades 2 and above.

About the Author and Illustrator

George Ella Lyon was born and raised in Harlan County, Kentucky, the daughter of a dry-cleaner and a community worker. She grew up with one older brother in a house full of music, stories, and books. Lyon is the author of With a Hammer for My Heart (a novel), Catalpa (poems, winner of the Appalachian Book of the Year Award) and Where I’m From, Where Poems Come From, a primer for young poets. Her books for young readers include five novels (Borrowed Children, The Stranger I Left Behind, and Here and Then), 22 picture books (among them Come a Tide, Together, Who Came Down That Road?, Counting on the Woods and Book), and an an autobiography, A Wordful Child.

Christopher Cardinale had a rootless upbringing following his educator parents through five states from Ohio to New Mexico. Inspired by Mexican muralism and anarchist punk collectives, Christopher works within marginally defined communities, painting murals whose subjects include the anti-globalization and anti-war movements. His large-scale murals can be viewed in New York, Italy, Greece, and Mexico. Publishing credits include a story in the Wobblies, a graphic history of industrial workers of the world; extensive features in the legendary WW3 Illustrated Magazine; and his riveting depiction of Hurricane Katrina’s aftermath in New Orleans became the first cover story comic in Punk Planet’s history.

One comment on “Which Side Are You On?: The Story of A Song”