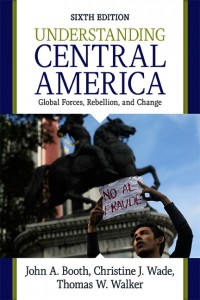 Understanding Central America explains how domestic and global political and economic forces have shaped rebellion and regime change in Costa Rica, Nicaragua, El Salvador, Guatemala, and Honduras. John A. Booth, Christine J. Wade, and Thomas W. Walker explore the origins and development of the region’s political conflicts and its efforts to resolve them.

Covering the region’s political and economic development from the early 1800s onward, the authors provide a background for understanding Central America’s rebellion and regime change of the past forty years. This revised edition brings the Central American story up to date, with special emphasis on globalization, evolving public opinion, progress toward democratic consolidation, and the relationship between Central America and the United States under the Obama administration, and includes analysis of the 2009 Honduran coup d’état.  [Publisher’s description.]