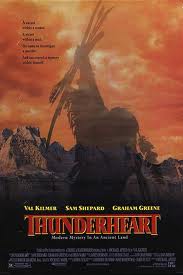 Although fictional, Thunderheart effectively captures some of the conflicts on the Pine Ridge Reservation in the 1970s. Its theme of corporate/government collusion to exploit Native lands for profit is still relevant today.  High school students find this film engrossing. Unfortunately, it was given ‘R’ rating for violence and language.

Producer’s description: Val Kilmer, Sam Shepard and Graham Greene star in this powerful murder mystery with all the style and suspense of Witness. Kilmer stars as Ray Levoi, a hotshot FBI agent who’s thrust into a strange new world when he is sent to solve a murder on an Indian reservation. Hand-picked because of his part-Sioux ancestry, Levoi is teamed with a legendary older agent (Shepard) to capture a radical Indian protester. But once on the reservation, Levoi encounters the irreverent local sheriff (Greene), and the tribe’s religious leader (Chief Ted Thin Elk), who knows secrets about Levoi’s own lost heritage. And as Levoi’s awareness of the native culture grows, so does his belief that the U.S. government has framed an innocent man. A crackerjack mystery and a personal triumph of the heart.